Band Company is one of ten companies which make up the Corps of Cadets. Rank structure, academic major, class structure, and athletic structure is identical to the rest of the Corps at large and any cadet is welcome to participate in the Band. 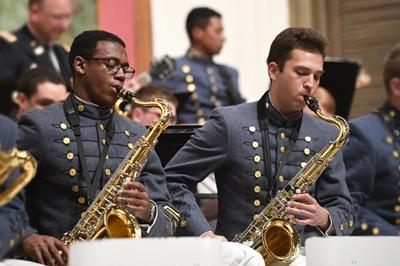 An important part of cadet life at VMI, the Regimental Band, and Pipes and Drums help improve the morale of the Corps and serve as musical ambassadors for the Institute. Selection for participation is through interview and audition. 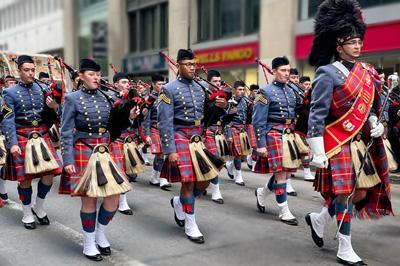 Band Company cadets participate in NCAA sports, intramurals, and Rat Training, as well as guard and company functions. All trips outside VMI are funded by the Institute and instruments are provided to the cadets by the school.

Virginia Military Institute has maintained a tradition of pride and excellence as part of the cadet experience, with Military music a part of that tradition since 1839. Since the beginning, a fife and drum was an integral part of Cadet life, transitioning to bugle and drum in the mid-eighteen hundreds, and then to the VMI Post band which drilled and provided music for the Corps. The Regimental Band was formed from talented musicians within the corps of cadets in January 1947. As one of 10 companies comprising the Corps of Cadets, the Regimental Band, and Pipe Band lead the way and set the tempo all other Cadets follow.

Whether performing at the Rose Bowl in Pasadena, California in 2008 and 2016, the 70th anniversary of Pearl Harbor in Honolulu, Hawaii in 2012, or at retreat review at the Institute, the Regimental Band, and Pipe Band enjoys a reputation as one of the nation's premier Military College bands. The cadets perform music for all tastes, from military marches to Big Band jazz, competitive pipe music to Pep Band for the football team, Band Company provides the soundtrack to each cadetship for the Institute, our country, and the world.

The Regimental Band consists of about 150 musicians. The Pipe Band is made up of approximately 40 pipers and drummers, and together these two groups form Band Company which comprise all classes, academic majors, and ROTC branches at The Institute.

Notable performances include five presidential inaugurations, performing as Virginia representative at France's Bicentennial parade in Paris in 1989, participation in the 2008, and 2016 Tournament of Roses Parade in Pasadena, California, thirteen award-winning performances at Mardi Gras in New Orleans, the New York Macy's Day Parade, leading the New York's St. Patrick's Day Parade, performing eight times at Disney World in Florida and California, scores of Virginia gubernatorial parades, and every major parade in the state.

Throughout History, the bagpipe has been used as an instrument of war; its sound can inspire troops into battle while simultaneously instilling fear into the hearts the enemy.

The VMI Pipe Band keeps this tradition alive, now as a ceremonial unit, instilling pride in the Corps of Cadets as a regular feature of on post parades and as musical ambassadors throughout the Eastern United States through concerts, parades, ceremonies, and festivals.

The tartan worn by the Pipes and Drums is the New Market Battlefield Tartan. Named for the battle in which the Corps of Cadets distinguished themselves, the primary colors of the tartan are the school colors of red, yellow, and white, along with blue-gray of cadet uniform.

Designed by Cadet Donny Hasseltine and Donald Frasier of Scotland, the Tartan also has four minor stripes of Light Blue, Green, Dark Blue, and Black, which represent the four ROTC programs at VMI, that of Air Force, Army, Navy, and Marines. The topcoat worn by the Pipe and Drums is the cadet Coatee, which is the standard formal parade uniform for Corps of Cadets.

The VMI "Commanders" were first formed as the "Ramblin' Keydets" in 1917, and since then they have provided music for dances and social events at VMI and throughout Virginia. The big band, styled after Glenn Miller's Band from the 1940s swing era, consists of 17 cadets at the "I" and a vocalist.

The ensemble has over 80 tunes in its book and is available to perform for two- to three-hour dances. Sponsored by Mr. Bill Phillips '47 and Buck Cavedo '47, the unit has grown musically, and now has an increased library of music and big band styled music stands. Members are selected by audition from all classes and majors. The cadets have been playing jazz music for 90 years on and off Post at dances at colleges and concerts, and each year the band plays for the VMI Ring Figure formal.

Most recently the band has played in Paris, France [March 2006], at the U.S. Ambassador's residence and the Ecole Polytechnique.

Live Commanders recordings are available for sale by contacting Col. Brodie - CDs are $15.

They perform at most formal events inside and outside of VMI, including Change of Command ceremonies, Department of Defense schools, and for guest speakers.

The Herald Trumpets were founded in 1976 and march in the Regimental Band for special occasions, in addition to performing at prestigious locations. Recently the unit performed at the Homestead and Greenbriar resorts and Constitution Hall in Washington D.C., and last year the group performed in New York City, at the public library.

With magnificent fanfares and patriotic music, the Herald Trumpets add a splash of color and pageantry to the Regimental Band. Comprised of seven Cadets, the Herald Trumpets can be spotted leading the Corps on march down before Saturday football games including solo performances of the National Anthem and the VMI Spirit before and after VMI home games, respectively.

The VMI Drummers perform each day to march the Corps to chow hall formations. This drum and bugle corps style drumline consists of 7 snares, two quads, four tonal basses, two sets of bells and cymbals. The VMI drum line is led by Cadet Nicholas Dreybus '15 and writes its own cadences. The drum line also performs a Corps-styled drum feature at halftime shows and other events. The line is essential to the mission of the band.

For over 150 years, the VMI buglers have been a crucial part of the Institute. They announce oncoming formations, play Reveille for the beginning of the military day and raising the colors, "Retreat" and "To the Colors" to announce the end of the military duty day and lower the flags, and finally at CQRB and Taps.

Their role is of utmost importance to the Institute by keeping cadets informed of formation and class period beginnings and endings.

The Concert Band rehearses weekly throughout the year and is awarded academic credit. The band combines with the Washington and Lee University Wind Ensemble each spring and performs several concerts per year.

The Glee Club continues its traditional program of concerts throughout Virginia and the eastern United States for alumni chapter gatherings, recruiting dinners, conventions, Spring Tour, and numerous appearances at VMI during the year. The Club's small select group, "The Sentinels," concentrates on appearances at events where the full Club would not be appropriate. In addition to singing the standard repertoire, The Sentinels feature popular music and entertainment of a lighter nature.

The VMI Glee Club is listed as an activity in the first VMI yearbook, the BOMB, published in 1885. In its early days, the club performed as much instrumental music as vocal, with guitars, mandolins, and violins accompanying the singing. The early entertainment took the form of minstrel shows, with formal concerts as we now know them not becoming standard fare until the 1930s.

The father of the modern VMI Glee Club was the legendary professor of English, Colonel Herbert N. Dillard, '34, who, while a cadet, was instrumental in organizing a club from informal groups which gathered on the stoops of Barracks to serenade the Corps late at night. Colonel Dillard became the Club's first director in 1941, and except for the war years, remained with the Club as its director and inspiration until 1957. 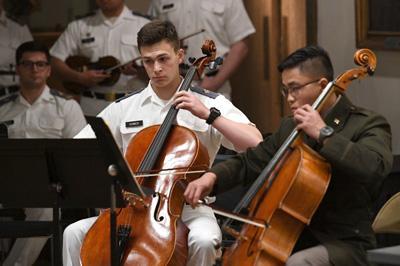 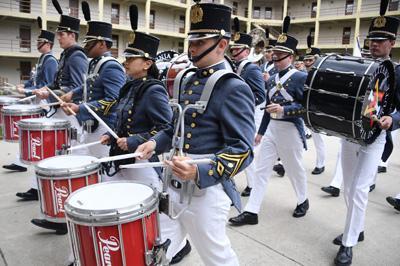