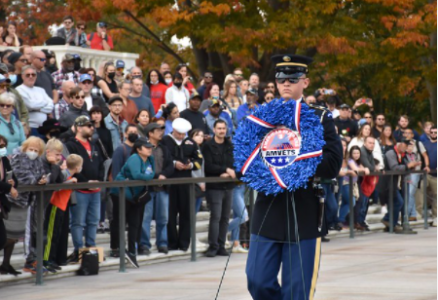 I had the distinct pleasure of attending the 24th Annual Veterans Conference and Honors and National Youth Leadership Summit in Washington DC from 4-7 Nov 2021. The conference took place over the course of two and half days and in that span of time I learned a tremendous amount about the service men and women who have sacrificed so much for this country. The conference was organized and put on by the American Veterans Center and mainly consisted of a series of panels composed of veterans and civilian leaders.

The conference began with the Wounded Warrior Experience, a series of panels composed of wounded veterans that was filmed for television broadcast. The Wounded Warrior Experience exposed us to a number of veterans who had undergone not only serious physical injuries, but mental injuries as well. Hearing the stories of those men and women was truly eye opening and I would like to recount one that was of particular note to me. Colonel John Alvarez is a retired Air Force Colonel who lost his leg in a helicopter crash during a special operations mission near the Colombian border. Thankfully, Col Alvarez survived the crash and was able to make it back to the States. Once he had recovered and received a prosthetic limb, Col Alvarez began a slow and painful journey back towards the cockpit. Col Alvarez would become the first US military pilot to return to full combat flying status following such an injury. Hearing the stories of Col Alvarez and more gave me insight into the massive amounts of sacrifice that American service members have offered during my lifetime. It is often easy to overlook the conflicts that US military service members are involved in across the globe due to a lack of media coverage and awareness. However, seeing and hearing from Wounded Warriors reminded me that there are veterans who every day struggle and overcome physical and mental difficulties that they sustained in conflict in the very recent past. The Wounded Warrior Experience provided an opportunity to be reminded of both the losses and victories that US military veterans have felt in the past two decades.

The next day after the Wounded Warrior Experience the conference kicked off in full swing with a series of panelists that switched throughout the day. The first panel was composed of American veterans from World War 2. The panel included members of the 101st Airborne Division as well as a Navajo Code Talker. The Code Talker was Mr. Peter McDonald, one of the four remaining Code Talkers and an inspiring speaker. During his time speaking Mr. McDonald recited a piece of code that was transmitted in Navajo during the battle of Iwo Jima. Hearing the words that were spoken by a code talker, during WW2, while under heavy enemy fire, was truly an awesome experience.

The conference next heard from Lt Col James Harvey and Captain Royce Williams. Lt Col Harvey was the first African American jet fighter pilot to fly in the Korean War. Later on during the conference I had the opportunity to sit and talk one on one with Lt Col Harvey, talking to a pilot that had flown legendary aircraft like the P47 Thunderbolt was fantastic. Lt Col Harvey and his fellow African American pilots faced discrimination and hardship in their pursuit to become aviators but they showed again and again that they were not only capable aviators but often the very best. Captain Royce Williams is a navy pilot who was engaged in aerial combat with Russian fighters over Korea. Captain Williams engaged 7 MiG 15 fighters with his F9F Panther and shot down four of them. This accomplishment against a numerically and technologically superior force is almost incomprehensible. Captain Williams was on his own and expended every round of ammunition he had while his aircraft sustained over two hundred and fifty bullet holes.

One of the most prominent speakers at the conference was the Honorable Chuck Hagel. The former SecDef spoke to attendees on the importance of safeguarding American freedoms and rights while at the same time cautioning against trying to turn every troubled state into a little America. Mr. Hagel was asked by a member of the audience what the experience was like to be SecDef during the Russian annexation of Crimea. Mr. Hagel responded with a thoughtful answer that alluded to the stress and difficulty of that situation as well as the sense of resignation that the US had about Russia annexing the peninsula. According to Mr. Hagel there were already Russian troops in Crimea before the referendum and therefore the verbiage of calling it the “Russian invasion of Crimea” is not entirely correct.

Members of the conference had the distinct pleasure of hearing from Henry Langrehr, Tom Rice, and Vincent Speranza. All three gentlemen were veterans of the European Conflict in the Second World War. Additionally, all three men were paratroopers and two of them parachuted into Normandy on D-Day. After growing up watching movies and reading books about D-Day and the Battle of the Bulge it was truly incredible to be able to listen to the stories of men who took part in that campaign. Members of the conference were able to listen to and engage with bomber pilots, coxswains, submariners and infantrymen from the greatest generation. One of the organizers from the event said that it may well be the last great gathering of WW2 veterans. The experience was both joyful and sobering. Getting a better insight into what the greatest generation endured in order to earn that title was truly eye opening.

The conference also hosted Brian Thacker, and Master Chief Edward Byers. Both men are recipients of the Medal of Honor, and both spoke to us during the conference. Although the conflicts that the men earned their citations in were decades and thousands of miles apart the same bravery and ferocity of spirit that both men possessed was obvious. Mr. Thacker was an artillery officer in Vietnam and Master Chief Byers was a Navy SEAL in the Afghanistan war. Both men committed amazing acts and both men are truly heroes.

The members of the conference were also lucky to hear the stories of three of the original “Rosie the Riveters”. Mrs. Elinor Otto, Mae Krier, and Jane Tucker all spoke to a captive audience about their experiences as women in an unfamiliar workplace during the Second World War. Rosies, as they were called, were responsible for building tens of thousands of planes and other machines during the war in a country that had sent a large portion of its common workforce to war. The conference also heard from Mrs. Carlotta Walls LaNier. Mrs. LaNier was one of the original Little Rock Nine, the nine African American students who integrated into the -at the time- all white Little Rock Central High School. After being confronted with mobs and massive amounts of hate and violence, the Little Rock Nine were eventually escorted to school by members of the 101st Airborne Division by order of President Eisenhower. Mrs. LaNier offered a powerful story of resistance to hate and prejudice and the ability to overcome it.

Overall, the conference was one of the best, if not the best, military oriented activities I have ever attended. The number of heroes that were in attendance and shared their stories was truly staggering. Hearing tales of valor, compassion, and heroism was truly humbling and an experience that I will never forget and always appreciate.