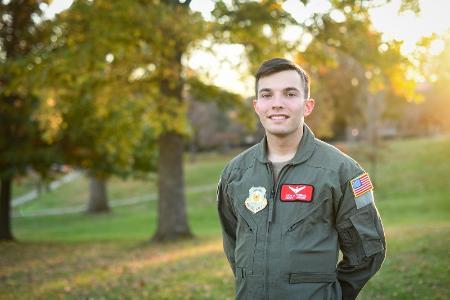 Leon Thomas ‘22 is a civil engineering major from Newport News, Virginia. After graduating, Thomas plans on commissioning as a pilot in the Air Force.

Thomas was inspired to join the Air Force by his father, an Air Force veteran. As he was exploring colleges, he heard about VMI from one of his teachers. Upon visiting, Thomas appreciated the tight-knit feel of the Institute, something he didn’t experience at larger schools. He received an Air Force scholarship and chose to matriculate.

In the Rat Line, Thomas found challenges and friendships.

“I didn't really know what to expect,” Thomas stated. “I heard [the Rat Line] was really hard, but it's completely different than what I thought it would be. It’s very challenging and arduous, but the biggest thing that I got out of it was making friends. What kept me here and motivated me to stay and keep trying was the relationships that I built with people.”

Thomas worked hard to balance all of the “yelling” and “really hard workouts” of the Rat Line with a heavy academic load.

“Since I was rat, I always focused on making sure I hit the books and [made] sure I got an A in every class I could,” Thomas said.

As a civil engineering major, Thomas tackles challenging STEM classes and enjoys learning about transportation and infrastructure. He’s thankful to have professors with prior military service who help him build connections between his classroom learning and future career in the Air Force.

“There's so much knowledge here,” Thomas commented. “There's all this different military experience from different branches that you really would never have seen in many other places.”

His hard work in the classroom paid off, as Thomas was able to secure a pilot slot in the Air Force.

“I didn't know if I'd actually get it or not, but it kind of fell into place and worked out phenomenally,” Thomas shared.

As a 1st Class cadet, Thomas leads the VMI Air Force ROTC cadets as wing commander. He appreciates the emphasis the program places on leadership and the wide array of opportunities cadets have.

As he looks back on his accomplishments, he is thankful for the opportunities that have come his way.

“If you asked me as a freshman if I'd be in the position I am, I'd probably say no way,” Thomas stated. “Really, the way that I did it was I set a goal, tried to figure out the way to get there, and set my mind to it. I did the best I could to stand out and take any opportunity they gave us.”