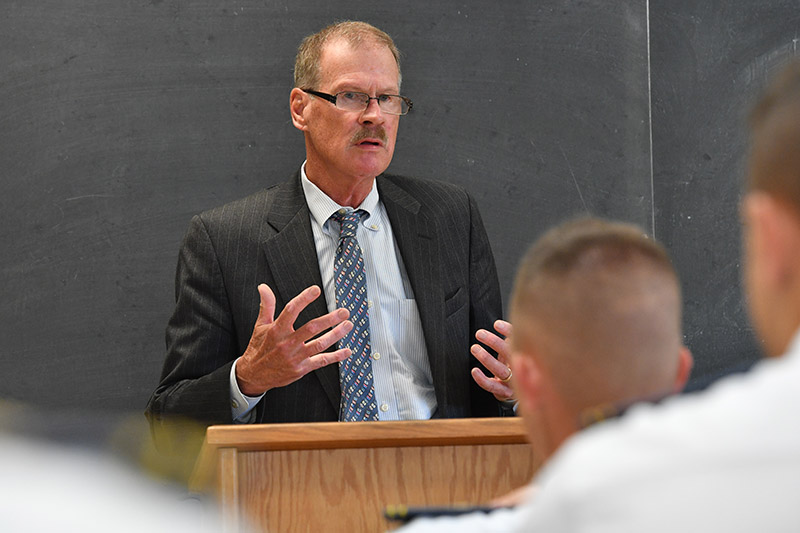 LEXINGTON, Va., Oct. 6, 2017—In a talk given at Virginia Military Institute Sept. 28, Pulitzer Prize-winning historian Dr. Walter McDougall asserted that an unstated civil religion that assumes divine favor for the United States has guided American foreign policy since 1776—and because of this, the United States has carried with it an assumption of the moral right.

McDougall, who is professor of history and Alloy-Ansin professor of international relations at the University of Pennsylvania, drew these insights from his recently published book, The Tragedy of U.S. Foreign Policy: How America’s Civil Religion Betrayed the National Interest. His talk at VMI was entitled “American Heresies: How Civil Religion Made Us a Dangerous Nation … Especially to Ourselves.”

McDougall began his remarks by acknowledging that in addition to being a historian, he is Vietnam veteran and a churchgoing Christian. He takes a critical eye, though, toward the well-worn assumption that God is on the American side.

“My lifetime of research on U.S. foreign policy has led me to some grave conclusions about the habit of nations, especially Americans, to conflate their own motives and deeds with those of the Almighty,” noted McDougall.

“In reality, Rousseau got it wrong,” McDougall stated. “In reality, throne and altar, church and state, have almost always been two sides of the same coin. Almost every regime in history has claimed some sort of spiritual legitimacy as well as secular authority.”

Because of this, McDougall argued, the establishment clause of the First Amendment to the U.S. Constitution proved no barrier to the ascendancy of a civil religion in the young republic that was the United States in the years after the Revolutionary War.

“What Americans worshipped was a deity—a deity whose theology was a rich amalgam of Enlightenment reason and Protestant Christianity,” McDougall said. “Americans took their divine right republicanism, as I call it, for granted so much that they never explicitly acknowledged it.”

That divine right, McDougall stated, expressed itself later in American history as belief in Manifest Destiny, and a belief that America had the moral obligation and imperative to assert its civil religion towards the Pacific.

McDougall sees strains of this in the Progressive Era championed by President Theodore “Teddy” Roosevelt, who sought to annex the Philippine Islands, and a continuation well into the 1950s when Presidents Dwight D. Eisenhower and John F. Kennedy strove to convince the citizenry that communism would not defeat the supposedly blessed and chosen United States.

“Now, I’m not a theologian, but I think that’s how heresy works,” McDougall commented. “Heretics jettison the whole counsel of God in favor of this or that passage or principle, out of which they concoct an entirely new theology and a new version of history to support it, yet all of the while calling their faith by the same name.”

This criticism of progressivism and rejection of a foreign policy rooted in a romantic theology, which aspires to heaven on earth, places McDougall firmly in the paleo-conservative camp, which instead favors prudence and restraint.

“Cold War presidents assured their national congregation that America was on the side of the angels and will prevail in what Kennedy called ‘a long twilight struggle,’” McDougall continued. This sense of an assured favorable destiny, he added later, was brought to the forefront again under the presidency of Ronald Reagan and his successors.

McDougall’s visit to VMI was organized by Lt. Col. Ryan Holston, associate professor of international studies. “Walter McDougall is about as big of a name as you can get when it comes to those who write about American foreign policy,” Holston noted.

In addition to his Thursday night speech in Jackson Memorial Hall, McDougall met with several groups of cadets, among them cadets in the Conservative Political Thought course that Holston teaches and the American Foreign Policy course taught by Lt. Col. Spencer Bakich, associate professor of international studies. He also met with cadets earning VMI’s national security minor, which is housed in the Department of International Studies and Political Science.

McDougall’s appearance at VMI was supported by a grant from the Charles F. Koch Foundation.