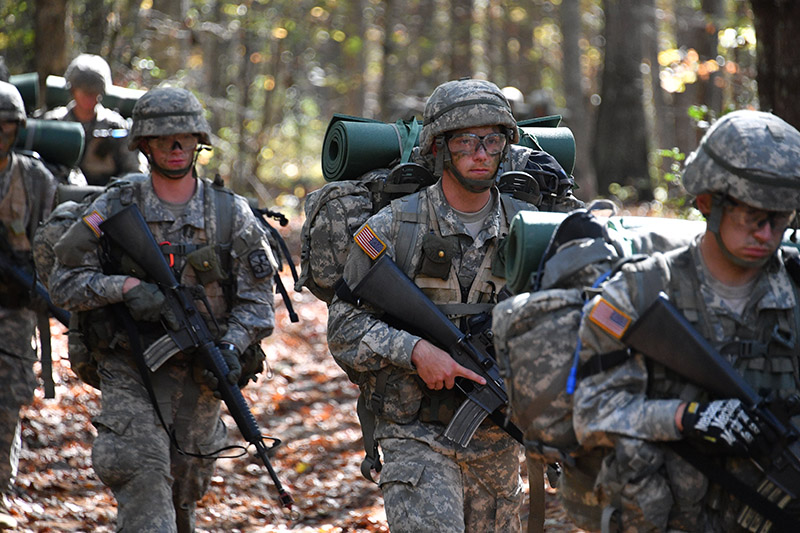 LEXINGTON, Va., Dec. 14, 2017—For 1st Class cadets at VMI, winter is a time for academics to take center stage as the months to graduation tick away, and there’s a final push to shore up or maintain a grade point average. But for commissioning cadets, the link between academic learning and the real world becomes closer than ever over the winter months, as many learn their branch assignments in the armed services.

Not surprisingly, each branch of the service does things a little differently. Future Army officers find out in mid-November which of the Army’s 17 branches they’ll be serving in, with options ranging from infantry to cyber to transportation, among many others. Future Air Force officers also have their military occupational specialties assigned in mid-November, after having filled out a “dream sheet” of top picks earlier in the semester.

Future ensigns in the Navy have already determined which path they’ll take, selecting from choices that include serving on a submarine or a ship, and those who’ll serve on a ship are awaiting February, when they’ll have the chance to pick their ships. Future Marine Corps officers are alone in not knowing what awaits: they won’t receive their job assignments until they’re near the end of The Basic School, the Marine Corps’ six-month training program for new officers.

For all commissioning members of the Class of 2018, the once-murky path to serving their country is becoming clearer as the academic year rolls on.

Emma Quirk ’18 will be a public affairs officer for the Air Force. With a major in English, rhetoric, and humanistic studies, Quirk is eager to put her writing skills to use in public relations.

“I loved every subject in high school, and I didn’t find any subject I was excelling at more than the others,” said Quirk of her decision to major in English. “I chose English because it’s a very broad skill base that it gives you. I knew I was going to go into some sort of job that would require me to read well, write well, and analyze material.”

As a child, Quirk was inspired by the story of Amelia Earhart and had long dreamed of becoming a pilot. Poor vision ended that dream, though, and Quirk was on the non-commissioning path with Army ROTC up until the past year, when the Air Force began adding additional slots for commissioning cadets.

“Things work out,” said Quirk. “I was on a different path, and it all worked out.”

In her coursework in the Department of English, Rhetoric and Humanistic Studies, Quirk has found the emphasis on rhetoric helpful to her future career. She’s even writing an Institute honors thesis on the use of certainty as an appeal in rhetoric.

“I’ve really enjoyed the chance to analyze classic literature, study philosophy and art, and ultimately, how rhetoric brings that all together,” Quirk commented. “I think the balance that the major has has given me all the skills that I came in wanting and has prepared me to get to the next level.”

And while there’s a definite link between Quirk’s academic major and her job assignment in the service, that’s not the case for all cadets, especially those commissioning into the Air Force.

“There’s plenty of positions in the Air Force that aren’t tied to any specific major,” said Col. Steven Biggs, commander of VMI’s Air Force ROTC unit. Biggs should know: he became a pilot after studying political science at the University of Texas.

With that being said, the Air Force is well known for commissioning cadets who major in the STEM fields.

“We’re the most technologically-centric of the services,” said Biggs. “That technology and innovation that we desire---that’s what we’re founded on—innovation and the power of flight.”

Academic major plays a role in job assignments in the Air Force, Biggs noted—but so do a cadet’s grade point average, commander’s ranking, and his or her preferences for an assignment.

“I don’t think anybody was surprised with something that wasn’t in their top six [choices on the dream sheet],” said Biggs. “For this graduating class, about 96 percent got their top three.”

Elijah Dean ’18 had been dreaming of a career as a Navy SEAL since his senior year of high school—and earlier this fall, that dream took a step closer to reality when he received word that he’d been selected for training. He’s the only cadet from the Class of 2018 to be selected for SEAL training—and one of only 17 to be selected from ROTC units nationwide, out of a candidate pool of over 140 individuals.

“I try to be in the gym a lot,” said Dean. He’s found, though, that it’s as important to be mentally fit as physically fit—and that the two are interrelated.

“As long as you’re consistent about working out, putting that above everything else, that’s what develops the mental toughness,” said Dean.

“It’s not about the fittest guys,” he continued. “It’s not about whether you can do 100 pull-ups or not. It’s about how bad you want it and how long you’re going to stick with it.”

On the academic side, Dean’s interest in criminal justice led him to select a psychology major at VMI. He noted that the behavioral psychology classes, which deal with how people act in groups and respond to certain stimuli, have been helpful preparation for his future career.

And while Dean knows where he’s going after graduation, many of his Brother Rats in the Navy ROTC still don’t know. That’s particularly true for future surface warfare officers, as they won’t pick their ships until early 2018. It’s a moment of great anticipation, as future ensigns sometimes meet the commander of their new ship by video teleconference.

Some are likely counting down the days already. “A lot of the students really want to get underway,” said Col. Dave Coggins, commander of VMI’s Naval ROTC unit. “They want to sail the seven seas.”

As Navy option 1st Class cadets wait for their assignments, Coggins and his staff work on helping them gain the extra edge necessary to become officers. They do so by adding their own ROTC spit and polish to what the Institute already provides.

“The polish we give them as a VMI cadet is like a naval polish, like a bowling ball that’s already pretty shiny,” said Coggins. “We kind of take a Navy cloth or a Marine Corps piece of camouflage and wrap that around them as much as we can.”

The Army ROTC likewise concerns itself with producing successful new officers. As with the Air Force and its “dream sheet,” the Army has a preference sheet that 1st Class cadets fill out, this time specifying which one of the Army’s 17 branches in which they’d like to serve.

Getting one’s choice of assignments in the Army is closely linked to a cadet’s standing on the order of merit list (OML), which ranks all ROTC cadets across the nation numerically from 1 to approximately 5,500. The OML, said Wawrzyniak, is compiled after cadets attend ROTC Advance Camp (formerly the Leadership Development and Assessment Course) the summer after their 2nd Class year, and includes components such as academics, performance in ROTC, physical training scores, and more.

“The military culture really feeds into their performance in ROTC,” said Wawrzyniak of VMI’s consistent success in producing cadets who rank highly on the OML. “The education they’re getting here is going to set them up to be a successful officer.”

One of those future Army officers, Ian Horkan ’18, had a dream come true this fall when he found out he would be entering the infantry—a goal he’d set for himself in elementary school.

“I’m really happy I got infantry,” said Horkan, a Massachusetts native who came to VMI specifically for the reputation of its Army ROTC and is now ranked number one on the VMI Army ROTC’s internal order of merit list. “It’s the one thing ever I really wanted to do.”

Completing the Army’s Basic Airborne Course this past summer affirmed Horkan’s decision that the infantry was the place for him.

“The amount of care that goes into that branch, the amount of care you see from the NCOs and the officers and the professionalism—I was incredibly impressed by that,” said Horkan. “It’s the most serious job in the Army.”

Horkan entered VMI sure of both the Army and his biology major, and he’s stuck with both. “I really like biology because it makes you think critically,” he commented. “I got STEM points for being a biology major toward my branch.”

This year, Horkan is combining his interests by writing an Institute Honors thesis on the impact of biological and chemical weapons on Army units in places such as Korea and Eastern Europe. Once he’s ready to retire from the Army, Horkan thinks he might use his biology degree by either going to medical school or taking a government job researching biological threats to the U.S. military. But he’s not thinking too far down the road just yet.

“I’m taking the Army for all its worth and want to go as far as I can.”