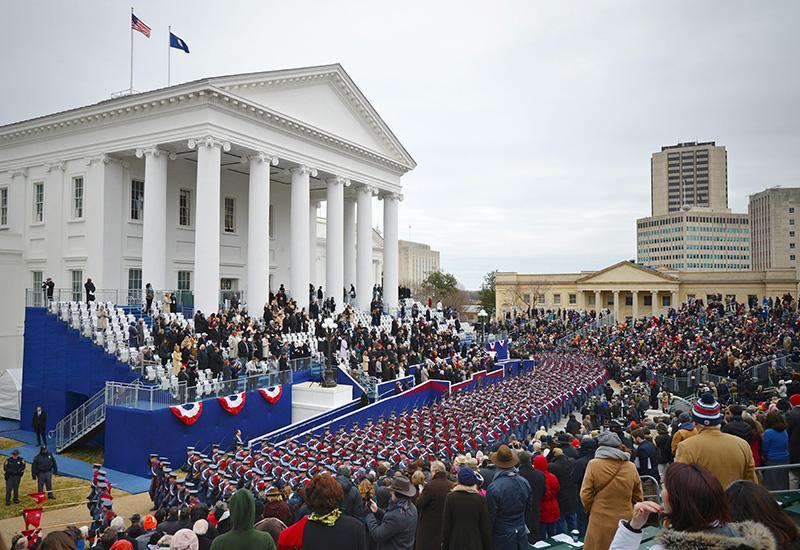 The Corps of Cadets marches past the reviewing stand during the inaugural parade of Gov. Ralph Northam ’81.—VMI Photo by Maj. John Robertson IV.

LEXINGTON, Va., Feb. 1, 2018—Just under 1,400 strong, members of the VMI Corps of Cadets marched through the streets of Richmond Saturday, Jan. 13, as part of the inaugural parade for Gov. Ralph Northam ’81, the first alumnus to serve as governor of Virginia in a century.

And as a special favor to the cadets, Northam made his first official act as governor the granting of amnesty for all penalty tours and confinements. Amnesty, noted Col. William “Bill” Wanovich ’87, commandant of the Corps of Cadets, is a seldom-granted privilege, and one that can only be granted by the commander in chief.

Preparations for the parade had been underway since the fall semester, as the Corps is traditionally invited to march in the inaugural parade for each new Virginia governor. This time, that involved bringing the Corps back early from the Christmas furlough so cadets would have time to get haircuts, have their uniforms repaired, if necessary, and practice for the big day.

“We just planned ahead of time,” said Kate Dixon ’18, S-3 regimental lieutenant. “Back in the fall semester, we made sure that the armory would be open, auxiliary services …so the tailor shop, military store and barbershop.”

Traditionally, she explained, cadets must return from a furlough by 10 p.m. This time, members of the commandant’s staff stipulated a return time of 4 p.m. Wednesday, Jan. 10, so cadets would have time to get themselves ready.

Practice parades began the next day. A few days before Christmas, Dixon, along with Wanovich and Col. Gary Bissell ’89, deputy chief of staff and operations, had traveled to Richmond to scope out the parade route. The trio quickly realized that because the route was long and narrow, it would make better sense to split the Corps into three battalions rather than the traditional two.

That worked nicely—and so did the decision to split Band Company into two sections, with the regimental band at the front and the pipe band at the rear. This way, Wanovich explained, all of the cadets would be able to hear the music and keep in step.

Three practice parades had been scheduled—one on Thursday and two on Friday—but in the end, a downpour Friday afternoon led to the cancellation of the last practice. Thankfully, the last practice wasn’t really needed.

“Sergeant Major [Neel] and I were watching Friday morning,” said Dixon. “[The Corps] looked great, so there was no need for that second practice.”

On the day of the parade, everything went like clockwork, except for when one of the 31 buses carrying the Corps broke down along Interstate 81. But even that was just a small hiccup, as the Corps always travels with a spare bus in case of a breakdown.

“It was a standard blown tire, and in the course of about 10 minutes we were able to move all of the kids off one [bus], onto the other one, and keep on going,” said Wanovich.

While most of the cadets formed into their companies to march in the parade, 50 of them, including Dixon, formed an honor court to escort the outgoing governor, Terry McAuliffe, to the inauguration, and then walk with Northam back to the governor’s mansion once the ceremony was complete.

“We actually got to watch the parade, which was really nice,” Dixon commented.

As she watched the inauguration, and listened to Northam’s inaugural address, Dixon found herself appreciating the fact that the new governor once wore the uniform of a VMI cadet.

“I started to think about my own brother rats, like who could be the next governor,” she stated.

Dixon also noted that Northam’s governorship had shown her that there are many paths to service for a VMI graduate. Northam served as a doctor in the Army, established a medical practice when he left the military, served as the volunteer director of a pediatric hospice, then sought elective office.

“It’s pretty impressive and it speaks to the education and training we get here at VMI,” Dixon said of Northam’s career path.  “You can be prepared to tackle nearly anything, and it doesn’t have to be in the military.”

Once the parade was over, cadets loaded back onto the buses, and were all back at VMI by 5 p.m. It was a much less stressful event, Dixon noted, than was the inaugural parade for President Donald Trump, held in January 2017, because the parade route was much shorter and there were fewer security checkpoints.

“It went very well,” said Wanovich of the gubernatorial parade. “It was a big deal to march in an inaugural parade for an alumnus. It added meaning to the day. It was extra special.”

Wanovich added that without the contributions of someone working very quietly behind the scenes, the day might not have gone so well. Neel, who has served as sergeant major for the past 17 years, retired Feb. 1.

“This is a tribute to Sgt. Maj. John Neel,” said Wanovich. “This was his last parade. He’s done many, many of these in his time here. He led the effort toward briefing and preparing the Corps. … Their very strong performance was a tribute to his hard work.”

Northam, a pediatric neurologist from Norfolk, Virginia, is the second VMI alumnus to serve as Virginia’s governor. The first, Westmoreland Davis, VMI Class of 1877, served as governor from 1918 to 1922.