'To Protect the Speech We Hate' 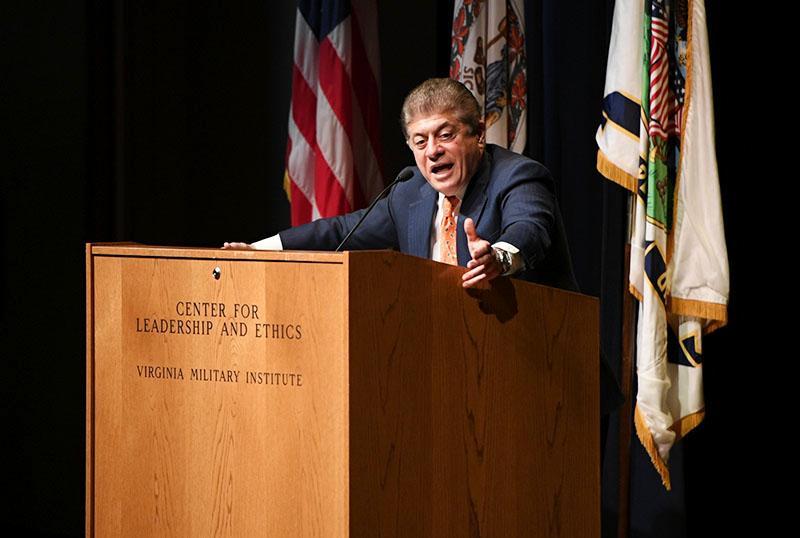 Judge Andrew Napolitano speaks to the crowd in gathered in Gillis Theatre during the eighth annual leadership and ethics conference.—VMI Photo by H. Lockwood McLaughlin.

LEXINGTON, Va., Oct. 31, 2017—Judge and Fox News judicial commentator Andrew Napolitano argued last night that the inalienable rights of man as outlined in the Declaration of Independence and elaborated in the Bill of Rights safeguard personal freedoms that are intrinsic to humanity and therefore should be the deciding factor when the judiciary determines whether or not laws are constitutional.

Napolitano, the youngest life-tenured Superior Court judge in New Jersey history and a prolific author, chose as his topic, “Speaking Truth to Power: How Do We Know When the Government Ignores the Constitution and What Can We Do About It?”

Napolitano began his remarks by saying that one can find a strong example of natural law, or what Jefferson would later call the inalienable rights of man, in the words of the Renaissance humanist Thomas More.

More, a lawyer who had served as lord chancellor of England, roughly equivalent to today’s prime minister, was on trial for treason in 1535 for refusing to acknowledge King Henry VIII as head of the Church of England, when he remarked, “Some men say the earth is round, and some men say the earth is flat. But if it is round, could the king’s command flatten it, and if it is flat, could an act of Parliament make it round?”

This sense of a natural order of things, what is today known as natural law, was later picked up by the Enlightenment thinker John Locke and then Jefferson.

“The natural law teaches that our rights come from our humanity,” explained Napolitano. “These are the rights we would have if government didn’t exist.”

Because he believed that these rights were intrinsic to humanity, and not granted by government, James Madison took pains to outline them in the Bill of Rights, Napolitano stated, as a safeguard against government intrusion into citizens’ affairs.

The 1787 constitutional convention, Napolitano said, pitted against each other two opposing sets of ideas. One, championed by John Adams and Alexander Hamilton, held that the rights of the citizenry come from the government, while the other, supported by Madison, held that individuals have intrinsic rights given them by their Creator, which the government cannot take away because it never had the right to grant them in the first place.

Over the course of U.S. history, the Bill of Rights has safeguarded Americans from the encroachments of government, particularly in war time, Napolitano noted—and it’s under fire today as terrorist threats abound and the balance between safety and liberty seems more difficult than ever to achieve.

“Does government exist to do the greater good for the greater number, or does it exist to protect the natural rights of law?” asked Napolitano. Going back to the constitutional convention, Napolitano noted that this was a question left unsettled even at the end of the 1780s, prompting Benjamin Franklin to observe, “Those who sacrifice essential liberty, in order to attain a level of temporary level of safety, deserve neither liberty or safety.”

Turning his attention to the present day, Napolitano heaped scorn on the Patriot Act, calling it “an abominable piece of legislation,” thanks largely to its blatant disregard for the First Amendment protections against search and seizure without a warrant. As it is written, the legislation also says that individuals cannot talk to one another about a warrant, a provision which has been declared unconstitutional.

“Under the Patriot Act, you can’t tell your spouse in the bedroom, your priest in the confessional, your lawyer in your lawyer’s office, that you have received [a warrant] without discussing it and thereby violating the terms of the statute,” Napolitano declared. “Does the Constitution really give that kind of power to the Congress?”

It is up to the judiciary—a branch of the government that Napolitano termed ‘anti-democratic’ because it protects against majority rule—to provide the checks and balances necessary against excessive governmental intrusion into citizens’ private lives, Napolitano believes.

“The right to hold and express an opinion is natural to our humanity, and even the majority can’t take it away,” he stated.

During a brief question-and-answer period after his remarks, Napolitano took questions from his audience about topics that included the free speech implications the recent white nationalist rally in Charlottesville.

Other topics Napolitano addressed from questions offered by members of the audience included the trend on college campuses to restrict free speech and the increasing polarization within civil discourse today.

The leadership and ethics conference continues today with discussion of topics such as civil discourse on college campuses and the role of journalists in holding government accountable.