Scott Shipp Renovation to Kick off This Summer 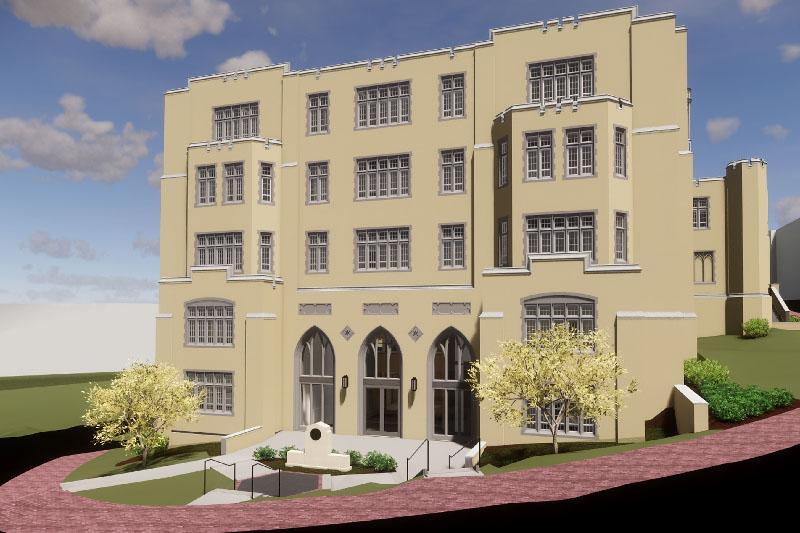 Once renovations are complete, Scott Shipp Hall will have an additional entrance facing Crozet Hall, as shown by this architect’s rendering.—Image courtesy of Col. Keith Jarvis ’82.

LEXINGTON, Va., April 11, 2019—Beginning this summer, one of VMI’s most heavily used academic buildings will undergo a $43.2 million renovation.

Scott Shipp Hall, home to five academic departments, will be under renovation and construction for the next two years with the goal of easing crowding and modernizing classrooms. The building, originally constructed in 1918-19 with an addition in 1955, will remain in use throughout the renovation, with departments and classrooms moving from one part of the building to another as the work takes place.

In addition to a complete renovation of the existing structure, plans call for a 28,000-square foot addition to be built onto the rear of the building. Work on the new addition, plus renovation of the 1955 addition, will begin in June 2019 and be completed in the summer of 2020. Classes and faculty offices will relocate to the oldest part of the building while the work is taking place.

Next, the original part of Scott Shipp will be renovated, with the goal of completing all of the work in time for the 2020-21 school year. The project is entirely funded by the state.

When the work is completed, Scott Shipp will have an auditorium with tiered seating—something the building currently lacks. “Nichols [Engineering Building] has one, and Maury-Brooke has one, but Scott Shipp doesn’t,” noted Lt. Col. Daren Payne ’90, construction project manager.

The main entrance off Letcher Avenue across from Shell Hall will also be completely reworked to eliminate what’s now on the most common “choke points” on post for cadets as they pass through a set of narrow doors to enter and exit Scott Shipp.

“You’ll actually come off Letcher Avenue up a set of stairs and go into a fairly large lobby or vestibule,” said Col. Keith Jarvis ’82, director of construction.

Also part of the renovation plan is a new, secondary entrance directly across from Crozet Hall.

“There’s a steady stream of cadets coming directly from Crozet Hall after breakfast to Scott Shipp,” Jarvis remarked. “This will become a well-used entrance as well.”A major part of the upcoming renovation will be the allocation of dedicated space for the John A. Adams ’71 Center for Military History and Analysis.

Currently housed in the small corner office of its director, Col. Brad Coleman ’95, professor of history, the Adams Center has as its mission to preserve and promote the study of military history, especially as it pertains to the Cold War.

Once the work is complete, the Adams Center will occupy a 3,600-square-foot space on the 300 level of Scott Shipp Hall, with office space for the director, deputy director, cadet assistants, and a research library.

“This is a transformational moment,” said Coleman of the Adams Center buildout. “I expect that we will emerge from the construction in 2021 with a large, vibrant, and impactful center.”

Other faculty whose departments are located in Scott Shipp are likewise looking forward to more and better space.

“We wanted to make sure everything was centered around cadet activity and collaboration,” said Col. Dennis Foster, former head of the Scott Shipp renovation committee.

“In terms of our home, it’s exactly what we want,” continued Foster, who is department head and professor of international studies. “It’s all about cadet collaboration. … Providing them not just with opportunities to hang their hat, but a place to actually do work.”

At present, Foster explained, cadets who want to work together have to find an empty classroom, which is not an easy proposition in a building as heavily used as Scott Shipp.