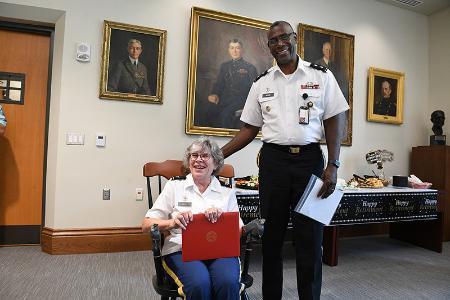 Maj. Gen. Cedric T. Wins ’85, superintendent, presents Col. Janet Holly a chair in recognition of her 37 years of service. She will retire from VMI on Sept. 1. –VMI Photo by Kelly Nye.

LEXINGTON, Va., Aug. 19, 2021--“What I’ve enjoyed the most is working with the cadets. I want to be open to them, be that friendly face at the reference desk, the circulation desk, and that they can approach me.”

That’s what Col. Janet Holly says about her position as a research and instruction librarian—a job she’s held for an incredible 37 years. Come Sept. 1, though, she’ll transition from employee to retiree, with plans to travel a bit, spend time at her Natural Bridge home, and give back to the community that’s given her so much.

A native of Freehold, N.J., Holly attended what was then a women’s college, Georgian Court University, and then faced the question of what to do after graduation. She remembers thinking to herself, “I don’t want to teach. It sounds like a cliché, but I love books and I love talking to people and finding information. I think I could be a librarian.”

With that goal in mind, Holly earned a master’s in library science at Drexel University in Philadelphia, Pennsylvania, and then began her career as a librarian in that city. By 1984, though, she was between jobs and looking for another opportunity when she saw an ad for the job at VMI. Col. James “Jim” Gaines Jr., then library director, not only hired Holly, but he rented an apartment for her on Jefferson Street and even arranged for utility hookups.

“Who else would do this?” she recalled thinking. Support came from others as well: the late Wylma “Sis” Davis, research librarian, was a valuable guide and mentor during Holly’s early years on the job, and so was Maj. Gen. John W. Knapp ’54, who was dean of the faculty when Holly first arrived and later served as the Institute’s 12th superintendent.

“He remembered names,” said Holly of Knapp, amazed by the fact that someone so high in the administration would know her, a newly hired employee.

There were frustrations, of course, as there are in any new job and new community. She described living 50 miles from the nearest mall as “a little daunting,” and she missed her friends and family back home in New Jersey. But the kindness of community members and the support she felt at work were more than enough to keep her in Lexington.

“The Lexington community and the VMI community were family,” she stated. “I didn’t realize that I’d have that experience here.”

Beginning in the late 1980s, Holly deepened her involvement in the local community by serving on the board of the Rockbridge SPCA, and by 2012, she was president of the board. Now that she’s retiring, Holly would like to get involved with the area’s animal rescue groups once again.

On post, she’s been supported in her professional growth with funds allocated to attend conferences, including one three-week stint at Oxford University in England. She also served on committees of the Virginia Library Association.

Each day, the job has been wide-ranging in scope. When Holly was hired, her background working in an engineering library was meant to complement that of Davis, who specialized in the humanities, but she quickly discovered that at a small school, everyone does a little bit of everything.

“At the reference desk, you don’t know if it’s going to be an engineering question or an English/history question,” she explained. “It just comes. I’m really doing a little bit of everything, and I’ve been in nearly every department’s class over the years.”

Holly can still vividly remember the layout of the library when she was first hired. “The circulation desk—both walls were lined with the card catalog,” she commented.

By 1990, the small paper cards were going the way of the dinosaurs, and Holly took a leading role in the seismic change to an electronic catalog. “It’s a small staff,” she said. “Everyone had to help. It was a big deal, getting a library catalog online, getting a circulation system online. I couldn’t have done it by myself.”

Always, Holly shares the credit for any success the library staff has enjoyed. “I’ve been very fortunate to work with some very talented people,” she stated. “It’s always been a wonderful work experience for me here.”

Her colleagues likewise say that Holly has made their work experience wonderful. “Janet is the saint of Preston Library,” said Lt. Col. Elizabeth “Liz” Kocevar-Weidinger, head of research and instruction at the library. “She’s the ultimate consensus builder—the best I’ve ever met—always a smile, always pleasant, always concerned.”

Assuaging the fears of cadets, particularly rats overwhelmed by VMI’s myriad demands, is a particular skill of Holly’s.

“The rats can get so anxious,” she commented. “This is their safe place. From day one, we advertise that … The people I work with had always taught me that the library was a place where teachers and students and the community could come and get some answers and be welcomed.”

Kocevar-Weidinger also praised Holly’s commitment to learning new things as a way of life, even near the end of her career. When the COVID-19 pandemic first swept the globe in the spring of 2020, and higher education institutions were forced to adapt to distance learning, Holly made the switch without missing a beat.

“We called her ‘Zoomie,’” Kocevar-Weidinger related, stressing Holly’s quick mastery of both Zoom and Microsoft Teams. “She’s always working for the benefit of our cadets.”

What’s more, Holly’s dedication has continued unabated even as the days tick down to her retirement. “She’s still in uniform. She’s still here every day,” noted Kocevar-Weidinger.

“There just couldn’t be anybody better than Janet.”