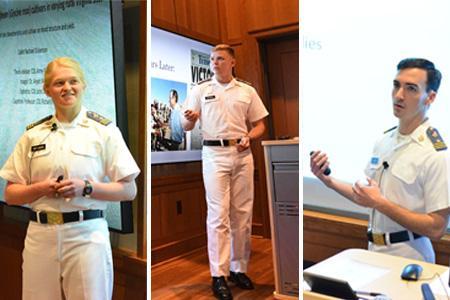 LEXINGTON, Va., April 6, 2022—Virginia Military Institute Honors Week, an annual event since 2003, showcases cadet research and scholarship across all disciplines. This year, 34 cadets presented their research to the wider VMI community, and a large number of cadets were inducted into academic honor societies, during the event held March 21-31.

Rachael Dickenson ’22, who is double majoring in biology and civil engineering, said she chose to work with an ongoing soybean yield project because, “I believed it to be a balance of my two majors, with applications in biofuels and other engineering aspects.” She went on to joke, “I was strongly discouraged from joining because of all the work involved.”

Her thesis titled, “Performance of Soybean Cultivars in Varying Rural Virginia Sites: Effect of Site Characteristics on Shoot Structure and Yield” examined the crop which provides food products like tofu, edamame, soymilk, and soy sauce. It is also used as a high-protein animal feed. The oil from soybeans is used in margarine, cooking oil, and in biofuel applications. It is a $168 million crop in the state of Virginia alone.

The soybean project was originally started in 2017 by previous cadets in the biology department and advised by Col. Anne Alerding. It involved planting nine different cultivars, which stands for “cultivated variety,” that is, different types within a species of plant, in two different sites within Virginia. Those sites are Orange, north of Charlottesville, which has a more clayey soil, and Suffolk, which is closer to the coast and has a more sandy soil. Once the plants were harvested, it was the task of the cadets early in the project to remove the leaves, take photographs of them, dry the plants, and manually and painstakingly count and weigh each seed.

Dickenson joined the project already in progress. She began a new phase of the project, involving computer science, statistical analysis, and image analysis. She wanted to find a way, using computer programming to speed up the process of assessing soybean yield and identifying the characteristics of the cultivars associated with an increased yield.

The conclusion reached by Dickenson was that soil was less important to the yield of the crop which she confessed, “was a bit of a surprise.” She discovered that the cultivar was more important. The work Dickenson performed will be labor saving for future studies in predicting pod to plant ratio yield.

Michael M. Hoffmann ’22, a double major in history and international studies, and who commands the 1st Battalion within the Corps of Cadets at VMI, defended his thesis in his presentation titled, “Kicking the Army’s Vietnam Syndrome: The Cultural Renaissance of the Post-Vietnam Army.”

In his presentation, Hoffmann reported that after the Vietnam war, the Army was inflicted by malaise, disillusionment, drug use, and terrible morale. Yet just sixteen years later in 1991, there was a decisive military victory in Iraq.

The extreme and significant change, Hoffmann argued, was due to the new culture in the Army, brought on by organizational honesty and leadership with new insight. He describes culture as the linchpin, a vital component that holds all other aspects of the Army together.

Hoffmann credits four conscientious commanders for the turnaround of the Army culture: Gen. William Westmoreland, who saw the importance to invest in people; Gen. John Cushman, who believed in teaching people how to think, rather than what to think, and believed in the strength of providing role models; Gen. Maxwell Thurman, who made organizational improvements and is credited with the slogan, “Be All You Can Be”; and Gen. Paul Gorman, who instituted the National Training Centers, which provide realistic and effective combat training exercises.

Carson Knox ’22 explored the relationship between writing and philosophy in his senior thesis presentation: “Nostromo and Schopenhauer’s Sublime.”

“Nostromo” is a novel written by Joseph Conrad, who is considered one of the greatest novelists to write in the English language. Knox considers Conrad one of his favorite authors and has enjoyed reading his books “Heart of Darkness,” “Lord Jim,” and “The Secret Agent.” “Nostromo” is one of Conrad’s lesser-known works and was chosen specifically by Knox since little research has been done on the novel. Knox admitted that the novel is a hard book to get through and is not a lot of fun to read, but worthy of studying. Written in 1904, “Nostromo” is set in the imaginary South American country of Costaguana, threatened by a revolution. The main character, Nostromo, an honest Italian seaman, seeks to restore the country’s stolen silver treasure.
Knox looked at the influence on Conrad by German philosopher Arthur Schopenhauer. According to Knox, Conrad was known to have read and was fond of Schopenhauer’s writings. Schopenhauer attributed suffering in life to what he called the “will,” which is striving, desire, urges, and the attachment to everything that exists. His definition of the sublime is the ability to escape the “will,” bringing on a state of serenity and higher knowledge. An example of such an escape would be meditating on the vastness of the universe and acknowledging oneself to be nothing.

Knox concluded that Schopenhauer’s philosophy helps the reader understand Conrad and the motivation of the characters he created in “Nostromo.” The work is an ethical statement, which Knox believes is Conrad’s purpose in writing the book. The characters perform unselfish acts for the benefit of others and the common good.

One major roadblock in Hulburt’s year-long research was a lack of reliable sources still remaining that document full names and family information of enslaved African-Americans and free people of color. He was able to find information in the VMI archives of two enslaved men: Michael Lyle and Ruben Howard, who were musicians and provided the crucial rhythm and cadence for VMI cadets as they marched in parades. Lyle and Howard wore distinctive uniforms consisting of red coats, white pants, and cocked hats. Their uniforms were different from those worn by the cadets, marking a clear hierarchy. At that time, there were less than 50 cadets, all white male, so Lyle and Howard were clearly recognizable and familiar to everyone on post as well as in the city of Lexington.

In addition to Lyle and Howard, Hulburt uncovered records of two additional slaves working on post: Jack, who was a baker and whose surname was not recorded, and Anderson Dandridge, who was a cook and baker. Dandridge worked at VMI for many years, including those during the Civil War, and died in 1871. At his death, one cadet who knew him eulogized him as “a fine baker, good cook, and fair friend.”

In researching free people of color during the years between 1839-1851, Hulburt continued to meet limitations in his findings. Like slaves, laborers were recorded by first name only, the literacy rate was low within this population, so finding personal or familial records was unattainable, and it was not until 1850 when the U.S. census began to count free people of color. However, he was able to find information on a free man named Diego Evans, who had multiple enterprises: sold cigars and other goods, had a barber shop and cut the hair of cadets on post, and operated a livery stable. Records indicated that VMI contributed in part to Evans’ ventures by paying him 41 times for services he provided. In 1850, Evans and his family relocated to Liberia, Africa, and sadly soon after, died from disease.

Hulburt concluded his presentation by arguing that the tasks performed for the Corps of Cadets by the enslaved and free African-Americans during that time, were vital for the day-to-day operations, and had it not been for their contributions, VMI may not have secured the subsequent state support and endowments. He went on to say that these are people who helped craft the narrative of VMI and are worthy of remembrance.