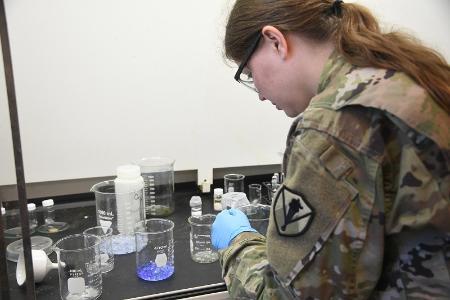 LEXINGTON, Va., Sept. 14, 2022—Leonardo da Vinci said, “Water is the driving force of all nature.” Clean water is essential for life and good health. Most people assume when they turn on the faucet that what flows out will be good to drink, acceptable for cooking, washing, and cleaning. But what if it’s not? What if water has been contaminated with drugs? How can one tell if tap water contains any toxins or pollutants?

Maj. Shannon Quevedo, assistant professor in the chemistry department at Virginia Military Institute and whose specialty is analytical chemistry and detection of small molecules using organic phases, is working on research with two cadets to create handheld methods for testing water. “The content of wastewater is a big concern for city and county governments that filter wastewater and provide drinking water,” stated Quevedo. “All sorts of substances end up in our wastewater: nicotine, cocaine, amphetamines, and opioids for example. Often people dispose of their leftover prescription medications by flushing them down the toilet, and they end up in the wastewater. Local authorities are able to track illegal drug use by testing wastewater. It’s a big concern for healthcare providers and policymakers, and we want to assist that endeavor by developing these small, completely portable and affordable test kits.”

Over the summer, Quevedo oversaw the research performed by two cadets, Emma Cameron ’25, and Bella Bruzonic ’25. Both cadets conducted similar research using hydrogels, a clear gelatin-like substance made of chemicals and water, as a base in which to conduct their studies, but each cadet used different substances to test.

Cameron, a chemistry major from Chesapeake, Virginia, said that common uses for hydrogels are contact lenses, hygiene products, and wound dressings. She wants to be able to detect cocaine in wastewater, enabling municipalities and law enforcement to know the extent and pinpoint locales of illegal drug use. Instead of testing cocaine, she used benzoylecognine, a legal substance similar in molecular structure to cocaine.

Bella Bruzonic ’25, a civil engineering major from Annandale, Virginia, chose sulphates to test. Sulphates are used in fertilizer and a common pollutant from industrial waste in many parts of the world. It is a major concern in Bolivia, where Bella’s family is from originally.

Once the test substances are added to the hydrogels, the cadets checked the petri dishes every hour to note any reaction. “Some results were seen in 24 to 48 hours,” reported Cameron. “We have allowed the petri dishes to sit for two months now and we see good results.”

The goal of the research is to encourage community science. “We want to encourage people to get involved with science and their community. School children will be able to take these test kits and check creeks, lakes, rivers, or just their tap water to determine if there are any contaminants. In addition, this research provides occasions for VMI cadets to talk with governments about their findings as well as public speaking and educational opportunities. But we are still in the testing phase. It may be another five to six years before the product will be ready for public use,” said Quevedo.

Cameron and Bruzonic may work on the project unofficially as their schedules allow during the fall and spring semesters, and will continue their research in earnest next summer.

Cameron plans to commission into the Army after graduation, then go into medical school. She is currently in the National Guard. Bruzonic hopes to work for a civilian cooperation or as a civilian in the military.