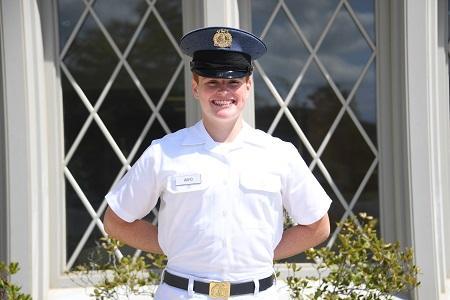 Candidates for the scholarship are evaluated in four criteria:

Ward never planned to attend any college other than VMI. “To me, education and learning is paramount. VMI has excellent academics, it offers the major I am interested in, I can play in NCAA Division I sports, and there is ROTC. VMI checked all the boxes for me,” said Ward.

She applied for both the Peay and Navy scholarships at the end of 2021. By January, she heard that she received the Navy scholarship and in March she heard she was awarded the Peay scholarship. “I was ecstatic when I heard the news. My parents were elated as well. There were plenty of tears of joy and hugs all around when I received that call,” recalled Ward.

Ward is a member of Band Company. She played the saxophone in high school, and hopes to join VMI’s jazz band. She plans to join the Pipe Band as well.

Ward is from Frankfort, Illinois, where she attended Lincoln-Way East High School. She is the daughter of Richard and Susan Ward. She is an electrical and computer engineering major.