Cmdr. Chip Barber served on active duty in the U.S. Navy for twenty-four years.  Operational tours included Patrol Squadrons in both the Atlantic and Pacific Theaters where he flew over 3,500 hours in the P3 Orion aircraft and earned designation as a Patrol Plane Mission Commander.  He was emergency-deployed for the Yom Kipper War and saw duty as Detachment Officer-in-Charge in numerous locations including Midway Island, Kwajalein, Diego Garcia, and Malaysia.  He was commissioning crew Navigator in USS Peleliu (LHA-5) in which he transited the Panama Canal and crossed the equator.

Shore duty assignments included two tours at the U.S. Naval Academy and one as Executive Officer at the University of Virginia NROTC Unit. At the Naval Academy, as a junior officer, he was course coordinator for the Celestial Navigation Course and Head Varsity Offshore Sailing Coach.  In the latter position, he was coach aboard a 56-foot sloop that won First-in-Fleet in the Transatlantic Race and First-in-Class in the infamous 1979 Fastnet Race in which five boats sank, and nineteen were killed during a severe storm. His twilight tour was as Director of Naval Academy Sailing where his intercollegiate teams won back-to-back National Championships.  He personally coached the First-in-Fleet winner of the 1992 Newport to Bermuda Sailboat Race over more than 180 top professional and amateur crews.

He earned a Naval Specialty in Aviation Antisubmarine Warfare and a Proven Sub-specialty in Education and Training Management.

His education includes a bachelor's degree in economics from Franklin and Marshall College, a master's degree from George Washington University, and an education specialist degree from the University of Virginia. 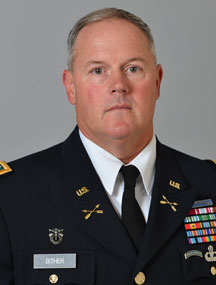 Lt. Col. (Ret.) William F. Bither served Army ROTC at Virginia Military Institute twice. During his first assignment to VMI, he was the Military Science IV Branch Chief/Detachment Operations Officer from 1996-1999 and during his second tour served as the Military Science I Branch Chief/Detachment Executive Officer from 2001-2005. He recently accepted the VMI position as the Director of Corps Marksmanship and NCAA Rifle Coach.

He graduated from North Georgia College in 1982 with a Bachelor of Science degree and was commissioned a Second Lieutenant of Infantry. He also holds a Master of Science degree in Education from James Madison University and is also a graduate of the United States Army Command and General Staff College.

In January 1984, His first troop assignment was as a rifle platoon leader in the 2nd Infantry Division, South Korea. In January 1985, he returned stateside and served as a Mortar Platoon Leader, Company Executive Officer, and Battalion Assistant S4 in the 2nd Battalion, 75th Ranger Regiment at Fort Lewis, Washington. From May 1985 until May 1989, he performed duties as an Operations Officer and commanded a Motorized Rifle Company in 4th Battalion, 23rd Infantry Regiment, Fort Lewis, Washington. Then, from July 1990 until August 1991, he attended Special Forces Assessment and Selection followed by the Special Forces Qualification Course at Fort Bragg, N.C.

In 1991, Lt. Col. (Ret.) Bither reported to 1st Battalion, 10th Special Forces Group, Germany and served as a Special Forces Detachment Commander from 1991-1994. In August 1994, he was reassigned to Fort Bragg and assumed command of a Special Forces Company in the 3rd Special Forces Group. In 2001, following his initial assignment to VMI, he returned to Ft Bragg as a member of the 18th Airborne Corps, Special Operations Coordination Element.

In April 2005, he was reassigned to Combined Forces Command, South Korea as the Division Chief for Ulchi Focus Lens Exercise Branch. From 2006-2008, he attended the Joint Forces Staff College and was assigned as the Special Operations Plans Officer, Joint Forces Command, Suffolk, Virginia and Army Liaison Officer to I MEF (Marine Expeditionary Force), Fallujah, Iraq.

Following his retirement from active duty in 2009, he worked as a military analyst/trainer for two major defense contracting corporations in the Hampton Roads area for over two years.

Bogart spent 38 years on active duty, including 78 months in combat. He deployed as chief of operations, deputy C-9 (forward), with the Combined Forces Land Component Command (CFLCC) in Kuwait, and later took part in the initial planning effort for Operation Iraqi Freedom, deploying to Baghdad, Iraq, as part of CFLCC’s early entry command post. He served a total of three tours in Operation Iraqi Freedom and Operation Enduring Freedom.

In addition to his service in Kuwait and Iraq, he served three tours of duty in Afghanistan, first deploying as chief of staff for the Combined Joint Special Operations Task Force—Afghanistan, and later as an Afghan-Pakistani Hand after having learned Dari, the most widely spoken language in Afghanistan, through the Defense Language Institute.

Bogart’s decades of service also included several tours in the Pentagon and the Washington, D.C., area, including as a Special Forces staff officer on Army Staff; chief, resource management for the Consequence Management Program Integration Officer; chief of strategic plans and programs at the National Guard Bureau’s Civil Support Office; and commander of the 32nd Civil Support Team (Provisional).

Most recently, Bogart completed a 21-month deployment to Afghanistan, contributing to the historic peace settlement between the United States and the Taliban that was signed Feb. 29, 2020. He then became chief of the Washington Field Office for the U.S. Southern Command, a position he held until his recent retirement.

“I am very thankful to the search committee, the senior leadership of the Institute and the superintendent for their trust and confidence in my future service to VMI,” said Bogart in a statement.

“As I look ahead, the road for VMI is both promising and demanding,” he stated. “It holds promise because we have the opportunity to responsibly advance the VMI experience, our traditions, and culture for all of VMI’s cadets, faculty, staff, alumni, parents and friends.”

A civil engineering major at VMI, Bogart held positions of increasing responsibility as a member of the cadre and served as executive officer of Company F his 1st Class year. Upon graduation, he commissioned into the Infantry and later transitioned into the Special Forces. In addition to his degree from VMI, Bogart earned a master’s degree in diplomacy with a concentration in terrorism from Norwich University.

“Col. Bogart’s impressive military experience, and his experience as a VMI cadet will be valuable each day in his new role,” said Maj. Gen. Cedric T. Wins ‘85, VMI superintendent. “There is no doubt cadets will thrive under his leadership.”

A native of New York, Bogart is proficient in French, German, and Dari. He and his late wife, Susan, have three adult children, Sarah, Catherine, and 1st Lt. Adrian T. Bogart IV.

Col. John A. Brodie has been the Institute's Director of Music since 1988. His duties include the direction of the Regimental Band, the VMI Commander's Jazz Ensemble, The Institute Brass, and he oversees the Pipe Band and the Glee Club. He directed the Glee Club from 2002-2012.

The Regimental Band has participated in over 1000 parades and performances on and off-post during his tenure, and he has had the privilege of directing hundreds of Cadets the Band Company.

Highlights of his career at the Institute include the band's appearances at the Tournament of Roses Parade in Pasadena, California, the Macy's Day and St Patrick's Day parades in New York City , the French Bicentennial in Paris, France, four Presidential Inaugural parades, New Orleans and Mobile Mardi Gras parades, and five Gubernatorial Inaugural parades in Richmond, Virginia. In 1997, the VMI Pipe Band was established under his command and now includes more than 45 Cadets, and it's own director. Various ensembles under his direction have performed throughout Europe, China, Japan, Russia, Brazil, and Puerto Rico. He is an honorary member of the class of 1992 and in 2005 he was chosen as the 25th honorary alumnus of the Institute by the VMI Alumni Association.

Formerly, Col. Brodie was a member of "The Commandant's Own", the United States Marine Drum and Bugle Corps in Washington, DC. He also taught in Granada, Colorado where he produced a state champion marching band. He holds a bachelor of science degree from West Chester University, and masters and doctorate degrees from the Catholic University of America.

Brodie is a native of Denver, Colorado. He is married and lives in Staunton, Virginia. 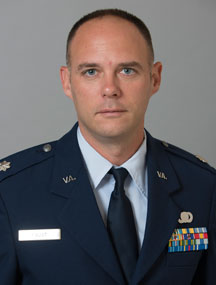 Col. Kevin Faust graduated from Virginia Military Institute with a Bachelors of Arts Degree in International Studies. A member of the class of 1996, he was commissioned as a second lieutenant in the US Air Force.

After completion of the Air Force’s Intelligence Course, Col. Faust was assigned to the 609 Air Intelligence Squadron (AIS). From April 1997 to April 1998, he served as the Deputy Chief of Air Defense Analysis. He continued to serve in the 609 AIS from April 1998 to April 2000 as the Chief of Human Intelligence (HUMINT) Collection Management. In April of 2000, Col. Faust was assigned to the Defense HUMINT Service (DHS), and served as a strategic debriefer for three years. Following this assignment, Col. Faust wrapped up his Air Force service with a one year assignment in Seoul, South Korea.  He was assigned as a targeting officer with Special Operations Command Korea (SOCKOR).

Col. Faust is a graduate of the Air Force Intelligence School, the Intelligence Collections Managers Course, the Defense Strategic Debriefer’s Course, and Squadron Officer’s School.  He received a Master’s Degree in Education from the University of Massachusetts, Boston in 2004.

Returning to VMI in the fall of 2005, Col. Faust served as the Assistant Commandant for Personnel and Logistics for six years.

Col. Faust is married to the former Allie Skukan of Chicago, Illinois. They have two children: Emma (12) and Cody (10).

Maj. Burt Mitchell has over forty years of piping experience. Mitchell is considered one of America’s top players on the instrument. He has been the full-time piping instructor at VMI since 2000 and has taught cadets who have never played before to become proficient players in the Pipe Band consisting in excess of forty-five members.

Maj. Mitchell is designing an American Military Pipe Band system suited for the rising number of institutions using the bagpipes for their ceremonies. He conducts teaching seminars for pipe bands and summer piping schools for individual players. He is the Pipe Major of “Warpipe”, Roanoke, Virginia’s unique Celtic/American Pipe Band and records and tours regularly with “Ceili Rain”, a Celtic/Rock band from New York.

COL Pegg was commissioned through the Virginia Military Institute (ROTC) in 1992. He was initially assigned to the 229th Chemical Company as a Platoon Leader in Roanoke, VA, and was mobilized for OIF1 in 2003. He was later assigned as Executive Officer and eventually Commanded the 229th Chemical Company. COL Pegg deployed to Afghanistan as the Asst S3/S5/NBC Officer with the 3-116th IN from Mar 04 - Nov 05. He returned to, once again, Command the 229th Chemical Company from Nov 2005 - Nov 2007. In 2007 he was assigned to the 1030th Transportation Battalion as the S3 Operations Officer, and deployed to Iraq as an LMAT Adviser with the 329th Regional Support Group. In 2010, COL Pegg returned to the 1030th Transportation Battalion and served as the Support Operations Officer and Battalion Executive Officer. In 2014, he was promoted to the 29th Infantry Division (Light) where he served as the CBRN Officer and deployed as the Chief of Protection for the 29th ID. He served as 1030th Transportation Battalion Commander October 2017 through April 2019. COL Pegg's next assignments were Deputy Commander, 329th Regional Support Group and J7 with the Joint Force Headquarters in Richmond, VA.  He is currently the Commander of the 329th Regional Support Group, Virginia Beach, VA.

Maj. Perry graduated VMI in December 2005 with a BA in History. While at VMI, Major Perry served as the 2004-2005 Honor Court President. Major Perry was also a scholarship athlete on the VMI football team.

Maj. Perry received the Board of Governors resolution from the VMI Keydet Club and the George C. Marshall Citizen soldier award while at VMI.

After graduation, Major Perry went on to be an Assistant Coach for the Virginia Crusaders semi-professional football team. Major Perry also worked for Social Services as a case manager for the City of Hampton before coming back to VMI.