Col. Elena Andreeva received her B.A. and M.A. degrees in Middle Eastern Studies at Moscow State University and her Ph.D. at New York University.  She is an Associate Professor of History at Virginia Military Institute where she teaches classes on Iran, the Middle East and World History.  Her research focuses on the interaction between East and West, Iranian history and culture in the 19th and early 20th centuries, and aspects of colonialism and imperialism in the Middle East and Asia. She has published articles on Persian and Dari literature, on Russian Orientalism, and on Russians in Iran. She is the author of Russia and Iran in the Great Game:  Travelogues and Orientalism (2007).  Dr. Andreeva’s current projects examine the “Orient” in Russian arts, including music, painting, and literature.

Dr. Jochen S. Arndt teaches advanced courses in African history and a two-semester freshmen course in World history. Geographically anchored in Africa in general and South Africa in particular, his research emphasizes global themes, notably the encounters between Africans and non-Africans and the dynamics unleashed by these encounters in terms of knowledge production and racial, ethnic, religious, and linguistic identity formation. With funding from a Social Sciences Research Council International Dissertation Research Fellowship and an American Historical Association’s Bernadotte Schmitt Research Grant, he recently completed his book Divided by the Word: Colonial Encounters and the Remaking of Zulu and Xhosa Identities. The book will be published in the Reconsiderations of Southern African History Series of The University of Virginia Press. He also serves as an Honorary Research Scholar at the Archive and Public Culture Research Initiative at the University of Cape Town, South Africa.

Christopher M. Blunda teaches advanced courses on the history of the ancient Mediterranean and the two-semester World History course. Before joining the History Department at VMI, he received a bachelor’s degree in Classics from Cornell University, a master’s degree in the History of Christianity from Harvard Divinity School, and a doctorate in History from the University of California, Berkeley. His research focuses on the cultural and intellectual history of the late Roman Empire, particularly asceticism in southern Gaul during the fourth, fifth, and sixth centuries A.D. He is the coeditor, with Susanna Elm, of The Late (Wild) Augustine: Context and Consequences (Ferdinand Schöningh Verlag/Brill, forthcoming).

Bradley Lynn Coleman is the director of the John A. Adams ’71 Center for Military History & Strategic Analysis at the Virginia Military Institute. He graduated from the Virginia Military Institute, Temple University, and the University of Georgia. Between 2007 and 2012, he served as command historian at U.S. Southern Command, the U.S. Department of Defense headquarters for U.S. forces in Latin America and the Caribbean. He is the author of Colombia and the United States: The Making of an Inter-American Alliance, 1939-1960 (2008). 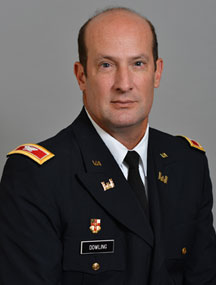 Timothy Dowling has been teaching history at the Virginia Military Institute since August 2001.  Since that time, he has authored a book on the Brusilov Offensive of 1916, edited a two-volume set entitled Russia at War as well as two volumes of Personal Perspectives on the world wars, contributed numerous articles to encyclopedias, and published book reviews in the Journal of Military History, the Canadian Journal of History, Mars & Clio, Global War Studies, and for the H-German electronic network.  He is currently working on a second book concerning the Battle of Mukden during the Russo-Japanese War (1904-1905).

Before moving to Lexington, Dr. Dowling taught at the Vienna International School in Austria and served as an adjunct assistant professor at Old Dominion University in Norfolk, Virginia. He earned his doctoral degree from Tulane University in New Orleans in 1999, writing a dissertation on the planned city of Eisenhüttenstadt as a model for constructing socialism in the German Democratic Republic.  From 1989 to 1993, he worked at the American Embassy in Moscow, Russia, and traveled extensively through the former Soviet Union.  Dr. Dowling has lived for extended periods in Tokyo, Vienna, Berlin, and Munich.  He frequently leads VMI study abroad programs to Budapest, Hungary, and he recently completed a semester as a visiting Fulbright Scholar at the National University of Public Service there.  He also serves as the book review editor for the Journal of Military History.

As the holder of the John Biggs ´30 Chair in Military History, Professor Jensen teaches courses on modern Europe, modern Spain, European warfare, and the history of insurgency.  He is the author of Irrational Triumph: Cultural Despair, Military Nationalism, and the Ideological Origins of Franco´s Spain (2002), Franco (2005), Cultura militar española (2014), and various articles and book chapters.  He also edited Warfare in Europe, 1919-1939 (2008) and co-edited (with Andrew Wiest) War in the Age of Technology: Myriad Faces of Modern Armed Conflict (2001).  His current research topics include Spain in North Africa and U.S. foreign policy in Equatorial Guinea. 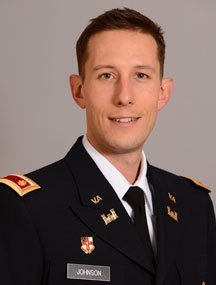 M. Houston Johnson V specializes in the history of the 20th century United States, with an emphasis on aviation history and the New Deal era. He teaches courses including The Progressive Era, The New Deal, War and Society in 20th Century United States History, The Vietnam War, and Historical Methodology. He has published articles on aviation infrastructure in the Journal of Policy History and the Journal of East Tennessee History; his book, Taking Flight: The Foundations of American Commercial Aviation, 1918-1938, is forthcoming with Texas A&M University Press. Johnson also served as the Associate Editor of the Sage Encyclopedia of Military Science.

Johnson came to VMI in 2012, after receiving degrees from Roanoke College and the University of Tennessee. He has received the Institute Wilbur S. Hinman, Jr. ’26 Research Award (2017), and serves as the faculty advisor for the VMI chapter of the Phi Alpha Theta history honor society, among other activities.

Jonathan S. Jones teaches advanced courses on the United States Civil War and Reconstruction, nineteenth century U.S. history, and the history of medicine, as well as the two-semester History of the United States sequence. Before joining the History Department in Fall 2021, Jones was the inaugural Postdoctoral Scholar in Civil War History at Penn State’s George and Ann Richards Civil War Era Center. He received a bachelor’s degree in history from Dallas Baptist University, a master’s degree in history from Texas Christian University, and a doctorate in history from Binghamton University (2020). Jones’s research investigates the complex social, cultural, and health legacies of the Civil War, including opiate addiction and disability among veterans. His research has appeared in publications including The Journal of the Civil War Era, Washington Post, Slate, Vice, among other. Jones’s public scholarship has also been featured on various public radio, television, and podcast programs.

Patrick J. (PJ) Klinger teaches the two-semester World History course as well as upper-division courses in environmental history and climate history. He is a graduate of Marshall University, East Carolina University, and the University of Kansas. Major Klinger's interdisciplinary research examines the role that weather and climate has on the interconnections between humans and the natural world. His current research projects explore how environmental and climatic changes influenced trade, political decisions, thought processes, human subsistence, adaptability, and ideas of resiliency from the early modern period to the present, while simultaneously inspiring new ways of perceiving, interpreting, and representing nature and provoking changes in the sea and land. 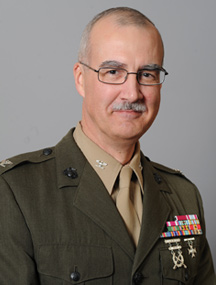 Professor Turk McCleskey received his doctorate from The College of William and Mary in 1990 and joined the VMI faculty in 1994.  His 2014 book, The Road to Black Ned’s Forge: A Story of Race, Sex, and Trade on the Colonial American Frontier (University of Virginia Press), is about the first free black landowner west of the Blue Ridge Mountains.  The Road to Black Ned’s Forge won the 2014 Virginia Historical Society's Richard Slatten Award for Excellence in Virginia biography, was one of three finalists (and the only work of history) for the 2015 Library of Virginia Literary Award in Nonfiction, and was one of the final twelve books considered for the Pulitzer Prize in History in its year.  His present research is a statistically intensive social analysis of civil litigation in colonial Virginia, from which he has published five juried journal essays in the last four years.

In addition to both semesters of the Introduction to United States History, Professor McCleskey teaches courses entitled Historical Methodology, Colonial America, African American Experience, and Applied History.  He offers capstone seminars for seniors on the American Revolution and North American Indians.  His teaching and contributions to the Virginia Military Institute have been recognized with the VMI Foundation’s Award for Distinguished Teaching (1999), the Faculty Mentor Award (2002), the VMI Achievement Medal (2005), the Matthew Fontaine Maury Prize for Excellence in Research (2016), and the Wilbur S. Hinman, Jr. ’26 Research Award (2018). 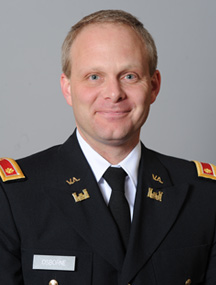 Lieutenant Colonel Osborne teaches a two-semester freshmen course on World history as well as advanced courses on British history, European History, World War I, the Indian sub-continent, and sea power.  The latter topic comprises two classes being 1588-1905 and 1905 to the present.

Lieutenant Colonel Osborne’s research focuses primarily on the impact of sea power in war and peace, particularly in the twentieth century.  He has published four books, among them being Great Britain’s Economic Blockade of Germany in World War I, 1914-1918 and The Battle of Heligoland Bight that were published in 2004 and 2006 respectively.  He has also appeared in eleven encyclopedias, writing on topics in naval warfare, imperialism, and diplomacy.  Additionally, he has authored several articles while an additional one on the 1680-1707 Mughal-Maratha Wars will appear in April 2020 in the series Small Wars and Insurgencies published by Routledge.  Currently, Lieutenant Colonel Osborne is working on a book concerning the 1918 Battle of Megiddo of World War I, being the last great cavalry operation in the history of warfare.

Madeleine Forrest Ramsey received bachelor degrees in History and Religious Studies from Randolph-Macon College; a master’s degree in History from Clemson University; and a doctorate in History from the University of Arkansas. She teaches the two-semester U.S. History course as well as upper-division classes on Antebellum America, the Civil War and the U.S. South. Her scholarly works primarily focuses on the Civil War in Virginia, examining how the war affected the lives of southerners on the local level. She also examines questions of citizenship during and after the Civil War and the ways in which ex-Confederates fought to regain power and control during Reconstruction. Before joining the faculty at VMI, she taught at Randolph-Macon College. 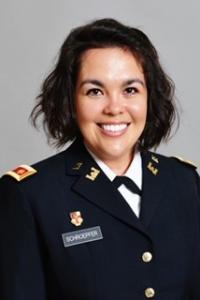 Liz Elizondo Schroepfer attained a bachelor's degree in Business Information Systems and a bachelor's degree in Latin American Studies from California State University-Chico; a master's degree in Latin American Studies from San Diego State University; and a doctorate in History from the University of Texas at Austin.
She teaches the two-semester World History course as well as upper-division classes on the U.S.-Mexico Borderlands and Latin America.
Her scholarly work primarily focuses on the interplay between race, gender, and sexuality on the northern frontier of the Spanish Empire, present-day Texas and Northern Mexico. Her current book project, Sex, Deviance, and Drama: Socio-Racial Relationships in the Texas-Coahuila Borderlands, investigates the multitude of ways officials and community members handled sexual transgressions.
Before joining the faculty at VMI, she taught at Valencia College.