Astronomical research at VMI is focused on measuring the polarization of starlight. Recently, a polarimeter was designed and constructed for use with the 0.5 meter, f/13.5 Cassegrain telescope at the VMI observatory.1 The polarimeter is based on the common dual-beam design and utilizes a rotatable half-wave plate and Wollaston prism to image starlight onto a CCD detector after passing through a broadband (or narrowband) filter. The usable field of view is approximately 10 arcminutes and the operational range of the instrument is 400 nm – 700 nm. 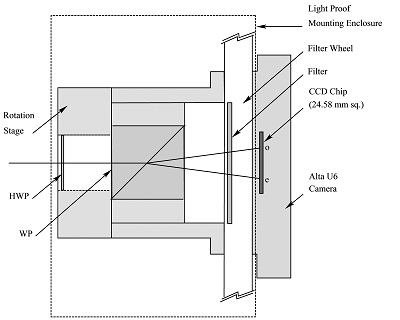 A cross-section of our polarimeter is shown in the figure to the right. The achromatic half-wave plate (HWP) from Karl Lambrecht Corporation is a 22 mm diameter, magnesium fluoride/crystalline quartz double-plate retarder, optimized for a wavelength range from 400 to 700 nm. It is housed in a compact motorized rotation stage (Thorlabs) that has a resolution of 1 arcsecond. The Wollaston quartz prism (WP) from Bernhard Halle Nachfl. GmbH has a usable spectral range from 0.23 to 2.8 µm and a ½ degree divergence angle. It has a 30 x 30 mm cross-section and is mounted in a coupling tube that connects the rotation stage to a filter wheel (Apogee) that contains Johnson-Cousins as well as narrowband filters. The filter wheel is connected to an Alta U6 CCD camera from Apogee which uses a Kodak KAF-1001E CCD imaging sensor. The imaging area of the sensor is 24.6 mm x 24.6 mm with 24 µm square pixels in a 1024 x 1024 array.

Images are obtained with MaxIm DL and aperture photometry is performed to measure the flux of the ordinary and extraordinary images of the star on the CCD detector. From these measurements, normalized Stokes parameters are obtained that are used to calculate the degree of polarization and position angle referenced to the line of constant right ascension on the plane of the sky. The table below lists measurements of standard polarized stars obtained using the broadband V filter during the testing of the instrument. Also listed are weighted averages of published measurements taken over different time periods by other various astronomers. The last two columns indicate the differences in the degree of polarization and position angle. An analysis using unpolarized standards indicates an instrumental polarization on the order of and less than 0.05%. 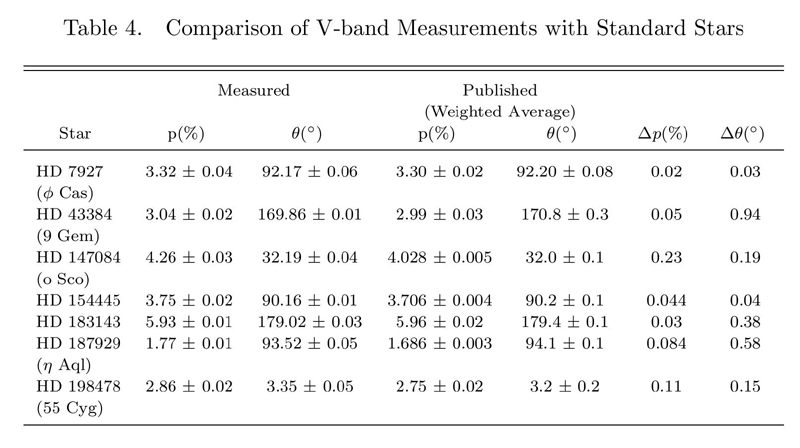 Measuring the polarization state of starlight can yield information about the interstellar medium (ISM), the nature and environment around certain stars, and the magnetic field in our local region of the galaxy. For example, one mechanism that can polarize light is selective extinction. As its name implies, polarization by selective extinction results from the extinction of light whose electric vector is in some preferred orientation.

Suppose unpolarized light (which has no preferred orientation of its electric vector) is incident on a solid dust grain in the ISM. If the dust grain is spherical, the scattered light will be partially polarized only at angles away from the propagation direction.  If the grain is not spherically symmetric, the unpolarized light will suffer polarization by selective extinction in the direction of propagation, since the electric vector that is parallel to the grain’s long axis suffers greater extinction than if it were perpendicular to the long axis. Now, if the non-spherical grains were randomly oriented in a region of the ISM, a net polarization is not expected – superposition would tend to randomize the electric vectors. However, in 1949 Hiltner2 and Hall3 showed that observations of solar type stars do show polarization. Since solar type stars have very little dust in their immediate vicinity and their intrinsic polarization is extremely small, the most probable and widely accepted origin of the observed polarization is due to aspherical dust grains that have a net statistical alignment of their long axes in a preferred direction in the ISM.

1 G. A. Topasna, D. M. Topasna, G. B. Popko, “An Easily Designed and Constructed Optical Polarimeter for Small Telescopes”, Publications of the Astronomical Society of the Pacific, 125, 1056 (2013)