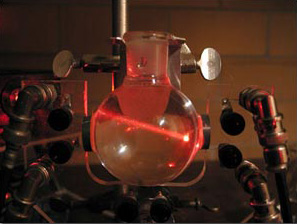 Sonoluminescence is the production of light by small gas bubbles, suspended in a liquid, which are undergoing periodic collapse caused by focused sound waves. The physical details for the transformation of sound waves into light are not understood and are currently the subject for research at VMI and at other universities.

Light production by high frequency sound in a liquid was first noted in the 1930s, but research in this topic did not proceed very far until 1989, when it was discovered that a single bubble could be suspended by resonant sound waves and caused to collapse and emit a flash of light at each cycle of the sound wave.

These pulses of light have a duration of a few tens of picoseconds (i.e., 0.00000000001 second!) and occur in the blue-violet part of the spectrum. Part of the difficulty of this experiment is that it is very sensitive to the conditions of the experiment and the nature of the sound waves and the extremely small size of the light-emitting region. 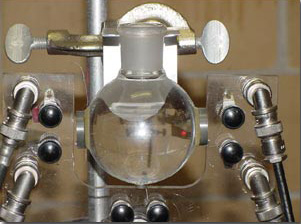 At VMI we developed a sonoluminescence experiment as an undergraduate research project.  The experiment is difficult both because of the sensitivity of the phenomenon to the character of the sound waves and because the intensity of the light is extremely small, with a very small light-emitting region.

We are attempting to measure the spectrum of the light using a fiber-optic spectrometer. We expect the spectrum to give some indication of the temperature of the bubble at the time of light emission.

We plan to study enhanced wave driving methods in the future. Simulations done at the Lawrence Livermore National Labs indicate that adding a pressure spike to the periodic driving amplitude should enhance the sonoluminescent effect. 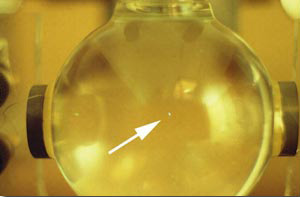