Dr. MaryBeth Drake is a lifelong learner and teacher with a BA in Special Education from Greensboro College, a Master of Arts in Liberal Studies from Hollins University, a Master of Science in Education from Nova Southeastern University, and a Ph.D. in Education from Walden University. She is especially interested in the experiences of first-year college students and the challenges they face. She has been teaching college-level English composition courses since 2005. Currently, she teaches English Composition and Literature courses online for Dabney Lancaster Community College in Virginia and Eastern Gateway Community College in Ohio. MaryBeth is also an artist and is a member of the Nelson Gallery in downtown Lexington, Virginia.

Stephanie began her work in writing centers during undergrad at Luther College in Decorah, IA.  After graduating with a B.A. in English Literature, she completed a Master’s in English Education from The University of Oklahoma in Norman, OK.  Stephanie has taught English/Language Arts for 7 years in the public school systems.  Most recently, she was a middle school English teacher at Lylburn Downing Middle School in Lexington.  Stephanie is excited to return to the writing center as a consultant at VMI and looks forward to the papers she’ll read in the coming school year. 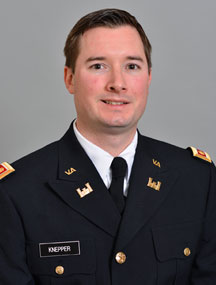 LTC Knepper arrived at VMI in the fall of 2014.  Since then he has taught a wide range of courses, including American Literary Traditions, Ways of Reading, the ERHS capstone sequence, and a seminar on Moby-Dick.  He especially enjoys teaching Philosophy and Literature, where he can discuss big questions with cadets, and American Modernism, which features favorite authors such as Claude McKay, Robert Frost, Willa Cather, Zora Neale Hurston, and F. Scott Fitzgerald.  He has directed capstone projects, SURI projects, independent studies, and honors theses on a variety of topics, from the poetry of Langston Hughes to the philosophy of Simone Weil, from Edgar Allan Poe’s Gothic conventions to Byzantine iconography.  LTC Knepper is the faculty adviser of VMI’s chapter of Sigma Tau Delta, the international English honor society, and he organizes an annual trip for cadets to the American Shakespeare Center in Staunton, Virginia.

LTC Knepper studied American literature in graduate school at the University of Virginia, and this remains a major teaching and research interest.  He currently serves as book review editor for the Robert Frost Review.  He writes metrical poetry and has published poems in a variety of journals.  Since arriving at VMI, he has become increasingly interested in the intersection of philosophy, aesthetics, and religion.  He is particularly interested in the early twentieth-century philosopher Gabriel Marcel and the contemporary philosophers William Desmond and Byung-Chul Han.  He is currently wrapping up a book project titled “Wonder Strikes: Approaching Aesthetics and Literature with William Desmond.”

In his free time, LTC Knepper enjoys spending time with his family, gardening, chicken tending, hiking, reading, and writing.  He can often be found in the book sections of local thrift shops looking for gems.

is an art historian who holds a bachelor's degree from Bradley University and a master's degree from Northern Illinois University. She also completed doctoral coursework and was admitted to Ph.D. candidacy in the Department of History of Art at the Ohio State University. Her university-level teaching experience includes lecturing in Introductory Art History course as well as leading seminars in Contemporary, Eastern European, Soviet, and Post-Soviet studies. Natalie’s research focuses on memory, socialism, post-colonialism, activism, globalism, visual rhetoric, national identity, and theories and concepts of space. In addition to working at VMI, she also teaches classes at Southern Virginia University, is a freelance graphic designer, and sits on the Boxerwood Volunteer, Events, and Promotion Board. In her off-hours, she enjoys reading, gardening, and cooking.

Gwendolyn G. Parson, Writing Center Consultant, is certified  by the Virginia Department of Education in English/Language Arts.  An educator for twenty years,  Mrs. Parson is proficient in student conferencing and writing instruction. Mrs. Parson earned a BS and MS in Education from Samford University in Birmingham, Alabama.

Mrs. Parson joined Virginia Military Institute's Writing Center staff because she enjoys the process of writing. She said, "Although many people do not consider themselves good writers, I seldom meet students who do not like to talk.  I believe that clear written expression begins with critical thinking and oral communication. It is through conferencing that students create concise writing that best communicates their thoughts and beliefs to their intended audience.  It is rewarding to be part of that conversation between the students and the assignment."

Laura Parsons holds a bachelor's degree from Carleton College and a master's degree from The University of Virginia. She was also a doctoral candidate at the University of Chicago. In addition to having teaching experience at the university level, she has worked as a book editor, a magazine editor, and a freelance writer. She is also an artist, with a background in design and computer graphics. In her off-hours, she enjoys travel, art, film, her pets, and cooking.

Elise Sheffield has been a part-time member of the Writing Center team for the past five years. A  Rockbridge County native, she holds a bachelor’s degree in  English from Brown University and a master’s degree in theology from Harvard Divinity School.  She is currently pursuing a second master’s in science education from Miami University (Ohio).  Previously a college instructor of composition and literature, she also works part-time as education director for Boxerwood Nature Center just outside Lexington.  Over the past decade, she has secured over $1.5  million in grants for area non-profits as a result of her ability to write clear and convincing prose. “To me, good writing reflects good thinking and is itself an act of leadership,” says Elise, whose favorite part about her job is helping cadets to develop those same life-long skills.   In her spare time, Elise enjoys going to movies at Hull’s Drive-In and traipsing through the woods near her home on South River; she is married and the mother of two college-age daughters. 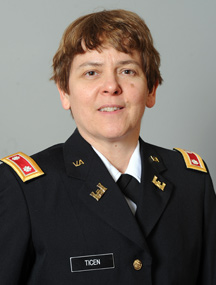 Lt. Col. Ticen is an Associate Professor of English Literature in the Department of English, Rhetoric, and Humanistic Studies. She taught at The University of Montevallo, in Alabama, where she was active in the formation of their program in undergraduate research, before joining the VMI faculty in 2003. Her service in support of VMI’s co-hosting of the Nineteenth National Conference on Undergraduate Research (with Washington and Lee University) earned her a certificate of excellence in 2005.

Lt. Col. Ticen’s graduate work focused on the use of myth and epic in the works of James Joyce, Salman Rushdie, and Derek Walcott. As a specialist in twentieth-century British Literature, she has taught courses in modernism, post-colonial literature, South Asian Indian literature in English, African literature, Caribbean literature, and contemporary literary theory. Her current research centers on the use of the essay by post-colonial writers such as Chinua Achebe, Ngugi wa Thiongo, Salman Rushdie, and Arundhati Roy. She has been awarded faculty development grants to attend the Wye Faculty Seminar in 2006 and the Jessie Ball DePont Seminar for Liberal Arts College Faculty in 2003.

Lt. Col. Ticen has been active professionally within her field as a referee/reviewer for scholarly articles that have been published in Currents in Teaching and Learning, College English, and South Atlantic Review. She has been an active member of the South Asian Literary Association for twelve years, serving on its governing board as an executive committee member, organizational treasurer, and conference co-chair in 2004, when she was also co-editor of the conference proceeding.

Since arriving at VMI, Lt. Col. Ticen has immersed herself in cadet life through her service as Assistant Officer in Charge in Barracks and as a facilitator with Cadet Counseling’s CTT Training Time for Rats. She has led groups of cadets on study tours to London four times in the past decade, helping them to more deeply understand British Literature through cultural immersion via theater, museums, historical landmarks, manuscript archives, and contemporary cuisines. In addition, she has served as a mentor for a number of cadet research projects and presentations, including the following:

Lisa Tracy is a freelance writer and editor and a lover of language and learning. A native of Lexington, she holds a B.A. from Oberlin College and an M.A. from Rutgers University. She is a former editor at The Philadelphia Inquirer, a teacher of composition and literature, and author of five books, including The Gradual Vegetarian, Muddy Waters: The Legacy of Katrina and Rita, and Objects of Our Affection. In her spare time, she swims, cooks, does yoga and volunteers for Friends of the Chessie Trail.