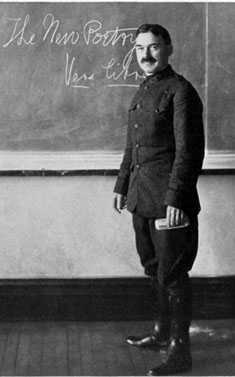 Cadet Fredrick Walker’s work for the Robert T. Kerlin website was done as part of a Field Work project in the Department of English, Rhetoric, and Humanistic Studies. Field Work projects allow cadets to apply their classroom learning in a professional or service learning environment and showcase their skills in research, analysis, and communication. Cadet Walker would like to extend a special thanks to his faculty advisor for the project, LTC Pennie Ticen. He would also like to thank Ms. Catharine Gilliam, COL Emily Miller, Dr Brandon Coffey,  COL Diane Jacob, and Ms. Mary Laura Kludy.

Dr. Robert Thomas Kerlin served as a professor, minister, soldier, author, and civil rights activist. Born on March 22, 1866, in Harrison County, Missouri to Kentucky natives, Kerlin had humble beginnings. His father owned several small farms which specialized in the raising and selling of Berkshire hogs and Southdown sheep. The Civil War, however, robbed the Kerlin family of all but their land. Following his father’s death in 1874, the eight year old Robert went to work on the family farms.

Despite his family’s financial woes, the young Kerlin was able to attend school for up to five months each year. In the spring of 1882, at the age of seventeen, Kerlin earned his teaching certificate and began his educational career at the Albany County Public School. In the fall of 1884, at the age of eighteen, he began his pursuit of higher education at Central College in Fayette, Missouri. Over the next several years he completed graduate work in the fields of English, History, and Philosophy at Johns Hopkins University, Harvard, and Yale (where he earned his Doctor of Philosophy in 1906). Kerlin went on to serve as a professor of English at several institutions including Missouri Valley College; Southwestern University; Yale; The State Normal School in Farmville, Virginia; and the Virginia Military Institute.

From 1895 until 1898 Dr. Kerlin served as a minister in the Southern Methodist Episcopal Church where he later participated in the compiling of a new church hymnal. He extended his ministry into the armed forces by serving as a chaplain with the Third Missouri Volunteers during the Spanish-American War. His time in the military inspired Kerlin to write The Camp Life of the Third Regiment -one of his many internationally renowned books. In the words of London, England’s The Spectator, “No other work deals so exhaustively and scientifically with the matters of which he wrote.” Kerlin’s other writings include: The Voice of The Negro, Contemporary Poetry of the Negro, The Church of the Fathers, Theocritus in English Literature, and Mainly for Myself.

Dr. Kerlin served as a professor and Department Head of English at VMI from 1910 to 1921. In June 1921, his troubles began when his “Open Letter to the Governor of Arkansas” appeared in the “radical”, anti-segregation publication The Nation. He wrote this letter in response to the news that ninety-two African-American men had been sentenced to life in prison or execution following the Elaine Riot. The riot was an uprising which ensued after a gathering of African-American men, women, and children were attacked by the Ku Klux Klan at their church in Hoop Spur, Arkansas. In the days following the attack, fifty to sixty African-Americans were killed while attempting to defend themselves from their attackers.

Six of the African-Americans arrested were sentenced to death by the governor. In his letter, Kerlin urged Governor Thomas C. McRae to “take the matter into [his] private chamber and give it an hour’s consideration, as before the Eternal Judge”. By quoting sections of the Bible, the Magna Carta, and the Bill of Rights, Kerlin hoped to dissuade the governor from executing the prisoners on June 10, 1921.

When the VMI Board of Visitors learned of his letter, Kerlin was dismissed from the faculty of the Institute in 1921. Other charges brought against Dr. Kerlin by the Board included the subsequent “protests of citizens of Arkansas”, “protests of VMI alumni in Detroit”, and Kerlin’s “lecturing in Lynchburg, Petersburg, Norfolk, and Richmond to African-Americans in African-American churches”.  Even after his harsh treatment, Dr. Kerlin continued to serve as an advocate for racial equality which led to his unpopularity throughout the South. Despite his poor reception at VMI, Dr. Robert T. Kerlin played a major role in the civil rights struggle of Virginia. 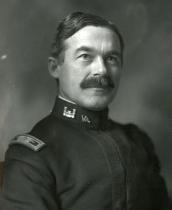 This book is almost entirely comprised of letters written by soldiers in the camp of the Third Missouri Volunteers during the Mexican-American War. All, but two of the chapters in this book are unedited personal letters. In this text, Kerlin (an Army chaplain serving with the unit) attempts to explain what camp-life was like from the point of view of someone who has “seen it all”. Kerlin opens this text with the Preface describing its contents. Immediately following the Preface is the Valedictory in which Kerlin remembers the regiment’s fallen historian and himself bids farewell to the soldiers that he has camped with. This book would be useful for someone researching the camp-life of soldiers during the era of the Mexican-American War. It would also be helpful to those studying the history of the United States Army National Guard or the United States military as a whole. A writer could easily compare the issues discussed by soldiers from the late 19th century with those contemplated by soldiers in both the 20th and 21st century US military.

In this text, Kerlin provides a brief history of the development of the African-American cultural identity through various forms of poetry by a variety of authors. Each of the eight chapters is centered on a particular aspect of poetry. For example, the first chapter discusses the history and development of African-American songs (to include the spiritual and the secular). Latter chapters include discussion on the works of various poets such as J. Mord Allen, W.E.B. DuBois, and Roscoe C. Jamison. This writing would be helpful for those researching the life of Dr. Robert T. Kerlin or even the history of African-American slave songs. This would also be a fine choice for researching African-American poets and their part in the history of the United States. This book might also be used to expose the fan of poetry to the texts and titles of some poems that they may not have previously known of or read.

In the words of Kerlin, “Virtually the entire Afro-American press, consisting of two dailies, a dozen magazines, and nearly three hundred weeklies” is drawn upon in this text. He seeks to present not only the voice of the Negro, but also the heart and mind of the African-American community as well. This text is composed mostly of newspaper and magazine articles that seek to answer the American race question. This text is divided into ten sections organized by topic (such as “The Colored Press, “The Negro’s Reaction to the World War”, and “Riots”) which include brief introductions. This compilation would be extremely beneficial to any researcher who is studying the African-American population’s view on race both in the past and in the present. Because it was written in the months that followed the Washington DC Race Riot of 1919, it would be a wonderful resource for anyone researching that event.

Robert Kerlin Documents, including autobiography (ca. 1912) and material relating to the VMI controversy, 1921-1922