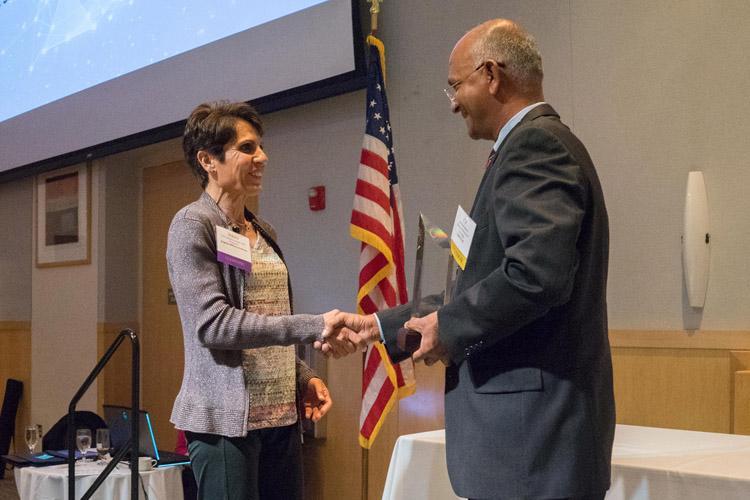 Col. Stacey Vargas, professor of physics/astronomy, received an award for “Innovation in Higher Education” from the Shenandoah Valley Technology Council in May. – Photo courtesy of James Madison University.

LEXINGTON, Va., May 23, 2017 – Col. Stacey Vargas won the Innovation in Higher Education award from the Shenandoah Valley Technology Council for her research of ultra-short-pulse lasers.

Since 2014, Vargas, a professor of physics and astronomy, has been studying the use of lasers for telecommunications at VMI along with a corporate partner – Attochron LLC.

“It’s very nice, obviously, to be acknowledged by an outside institution,” Vargas said. “The most rewarding part is the benefit [the project brings] to cadets and the educational piece; that’s where I get my enthusiasm.”

Her work started with funding from a Center for Innovative Technology grant of $100,000 and funding has increased to a $1 million investment from New York-based private equity firm Three Cities Research Inc.

At each stage of the project, VMI cadets from a spectrum of science, technology, engineering, and math majors have been involved.

“[The cadets] have to be able to communicate across disciplines,” she said.

They are required to submit weekly reports to Attochron, which Vargas said empowers them to be more engaged with the project.

She said it has been a great opportunity for the cadets to learn the research and development side of the project as well as the business side.

Cadet Will Johnston ’17 has been involved with the project for two years, either as a student or an intern with Attochron. He graduated from VMI as a double major in mathematics and physics and commissioned in the U.S. Air Force. He is the only cadet in the nation to receive a physics-in-residence Air Force Institute of Technology assignment.

He credited his experience with the research project and mentoring by Vargas for his decision to pursue the study of nuclear physics in the Air Force.

“I think it is great that she has won the award. In my opinion, I think she deserves much more than a single award because of what she has done to expand cadets' experience past the classroom academics into real world research and business,” Johnston said.

When the project first started, it was housed in the VMI greenhouse with a linking site 300 meters away at the Foster Stadium press box. Since data transmission was successful there, they looked to expand the distance between sites.

The goal was to find a distance of 1 kilometer, which would be more viable for real world applications.

While the VMI site remained in the greenhouse, a second site was developed at the Robert E. Lee Hotel and then moved to where it is now, on the roof of the Carillion Stonewall Jackson Hospital.

The roof of the hospital allows the team to see if the project is viable in all weather conditions, from early morning fog to a 7-inch rainfall, Vargas said.

Vargas said the hospital has been very accommodating to the project. The next step is attempting a data transmission using the USP laser, most likely a movie file, to see if data can be sent both ways or “bi-directionally.”