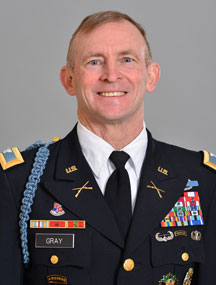 Col. David Gray, Ph.D., US Army (Retired), assumed duties as Director of the Center for Leadership and Ethics in August 2014.  He manages the Center’s programs to enhance the Corps of Cadets’ leadership, character, and ethical development, as well as challenging them through an annual series of conferences on topics of national and international importance.

Col. Gray is a 1980 Honors Scholar and Distinguished Military Graduate from Western Illinois University.  He has earned masters and doctorate degrees in military history from The Ohio State University and a masters degree in Strategic Studies from the U.S. Army War College.   Col. Gray was selected as a Federal Executive Fellow at Brookings Institution from 2003-2004.

During his military career, Col. Gray exercised executive leadership in command and staff positions of increasing responsibility across the globe.  He commanded progressively larger units from an infantry platoon through a multi-functional brigade combat team.  His overseas deployments included Haiti, the Balkans, Afghanistan, and Iraq.  He commanded the 1st Brigade Combat Team, 101st Airborne Division (Air Assault) in Iraq from 2005-2006.  He worked as an operations officer and strategist during tours on the Joint and Army Staffs in Washington D.C.

Col. Gray has served as a faculty member and academic leader at several public and non-profit educational institutions including:  West Point, University of Maryland, Valley Forge Military Academy and College, and The Ohio State University.  He served as Chair and Professor of Officership at the Simon Center for the Professional Military Ethic at the United States Military Academy.  Col. Gray joined VMI after serving as the Director of Strategy and Campaigning at the Saudi War College in Riyadh, Saudi Arabia.  Col. Gray’s research and publications focus on topics in modern military history, policy/strategy, and leadership.

Col. Gray and his wife Karen reside in Lexington.  They have three daughters:  Stephanie, Jennifer, and Megan.