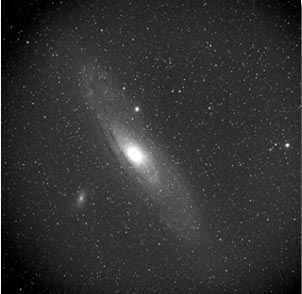 The Andromeda galaxy is the closest large spiral galaxy, and the only other large spiral in the small cluster of galaxies where the Milky Way is located. It is very nearby (on a cosmic scale), with a distance of roughly two million light years, and the central core is visible to the unaided eye from a dark location (away from city lights), in the constellation of Andromeda.

The famous Andromeda galaxy is a huge spiral galaxy, like our own Milky Way. The two small diffuse objects are small galaxies in orbit around M31. The stars seen are foreground stars in our own galaxy. Through most telescopes only the bright central core of the galaxy can be seen, partly because of the angular scale and partly because of the faintness.

What is rather striking about M31 (#31 in the Messier catalog) is the angular extent of this galaxy across the sky. The full moon subtends an angle of 1/2 degree, and this galaxy spreads out approximately 15 times the size of the full moon. Our eyes are not sensitive enough to see the outer regions of this galaxy, but a photograph will capture this. The image below was obtained with a 20-minute exposure on T-Max 400 black & white film.

Film has been used for over 100 years to capture the faint astronomical objects through the telescope, and has served a very useful function. Now, electronic imaging has taken over for quantitative measurements, and charge coupled devices are the dominant electronic detectors in astronomy. 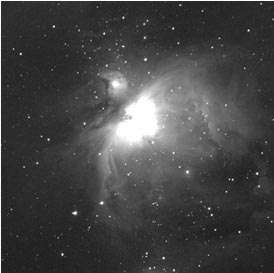 We have recently obtained a new CCD camera, model AP6ep, from Apogee Instruments. The array size on this chip is 1024x1024, with a pixel size of 24 microns. Hence it is matched to the plate scale on the 20-inch reflector, and we are using it for research. Here we have  mounted this camera on our Astrophysics apochromatic refractor, for a wide-field image. First results are shown here.

This is a 30-second exposure of the Orion nebula obtained with a CCD camera on the 5-inch f/7 Astrophysics refractor. No filters were used, and the digital image was stretched to show the outer regions of the nebulosity. This image is approximately one-fourth of the entire image.