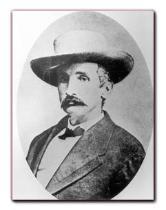 Benjamin Franklin Ficklin was known for his grand sense of adventure. His career was varied - surveyor, soldier, secret agent, scout - but he is, perhaps, best known as one of the founders of the famed Pony Express.

Ben Ficklin was born in 1827 in Albemarle County, Virginia, the fifth son of Benajmin Ficklin and Eleanor Slaughter. His father, a Baptist minister who also ran a successful tobacco business, was determined to instill discipline in his son. In July 1845 Ben entered the Virginia Military Institute, where he soon became famous for his pranks and exploits, regularly disobeying the Institute's regulations. He set off fireworks beneath a reviewing stand, painted zebra stripes on the horse of Superintendent Francis H. Smith, and "placed two buckets of water over the door" leading to a faculty room, "& smeared the door handle with a quantity of filth." Ficklin was dismissed in late 1846 and - rather than return home in disgrace - he enlisted in the Army. He served for a brief time and was wounded during the Mexican War. He subsequently petitioned VMI for readmission, and he returned to the Institute and graduated in July 1849.

worked briefly as a teacher following graduation, Ficklin quickly realized he was ill-suited to that profession. He joined an express company in Alabama, and then moved west. He found employment with a freight line company on the western plains during the 1850's and in 1857 began work on a series of western surveying expeditions. Ficklin returned to the express and stage business in 1859, capitalizing on the boom in commercial transportation fed by western expansion and the Pike's Peak Gold Rush. Along with several others, he formed the famed "Pony Express" courier service in January 1860 and served as a key partner in the venture until he left the company due to a conflict with another partner.

Ficklin loved his adventurous life on the frontier, as expressed in an 1859 letter to Superintendent Francis Smith: "If you would like to take a buffalo hunt on the Plains, come out about August 15th. It will take two weeks, not cost anything, and is the most exciting sport in the world except making love to the girls." Smith maintained a cordial relationship with Ficklin, as indicated in this letter from 1860:

"You have no idea what a commotion occasioned in the City of "Gotham" when it was known that a package of gold was at the Express office for Col. F.H.S. & all the way from Kansas & from B.F.F. Even the young ladies were on tip-toe on the occasion. I have no doubt surmises were afloat that orders were received by the said F.H.S. for the manufacture of a plain gold ring-- But who was to be the lucky lass for whom this ring was designed. To answer all these queries was out of the question. "Pony Express" would break down in the effort, so I had only to say in your own language, "I had not time to attend to such matters." But more seriously the gold has arrived & I thank you for it. It is not only a fine specimen of Pike's Peak, but it is a grateful remembrance from one whom I have so much reason to respect."

When the Civil War began in 1861, Ficklin returned to his native Virginia to assist the Confederate cause. Early in the war he saw active field service; he subsequently served as a Confederate government purchasing agent in England and worked in intelligence. Postwar, he operated a stage coach express business in Texas, having obtained significant government contracts for carrying mail in the Texas frontier region. Ever the adventurer, Ficklin persisted despite frequent Comanche attacks on the stage lines and stations.

Ficklin's business venture required regular trips to Washington, DC to deal with the U. S. Post Office bureaucracy. In March 1871, while in the city to lobby for mail contracts, Ficklin and a friend dined at a Georgetown restaurant and a fishbone became lodged in Ficklin's throat. He died several days later, as a result of an artery being slashed by the doctor attempting to remove the bone. He is buried in Maplewood Cemetery in Charlottesville, Virginia.