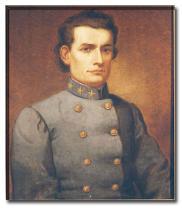 John Bowie Strange was born in 1823 in Fluvanna County, Virginia, the son of Gideon Alloway Strange and Harriet J. Magruder.  When the new Virginia Military Institute opened its doors to cadets on November 11, 1839 he was one of the small group who enrolled that first day. He had the additional distinction of serving as the first cadet sentinel assigned to guard duty, replacing the militia that had previously been charged with guarding the stores held in the Lexington Arsenal. His classmate Edmund Pendleton* later described the scene:

"When, on the 11th of November, 1839, the youthful band of raw and undisciplined cadets marched to the Institute hill to relieve Captain David E. Moore, who had up to that time guarded the arsenal and other public property there, it fell to the lot of young Strange to be the first to go on post as a sentinel. I doubt if he had ever seen a soldier or held a musket in his callow hands before. The business was as new to his comrades as to himself , and of course he was the object of the careful observation of all. I well remember, as if it were an event of yesterday, how promptly and resolutely he obeyed the first order to duty, how impressed he seemed to be with the dignity of his new position, how erectly he held his musket with bayonet fixed, and how soldier-like was his posture."  The tradition of guard duty continues to this day.

Following his graduation on July 4, 1842, Strange pursued a career in education, serving as a teacher, as Principal of Norfolk (VA) Academy, and as Superintendent of the Albemarle (VA) Military Academy. He married Agnes Gaines in the early 1850's and the couple had four children: Agnes, Henry (VMI Class of 1873), Willoughby, and James (died in infancy). During the Civil War, Strange served as Colonel of the 19th Virginia Infantry Regiment. He was killed at the Battle of South Mountain (Maryland) on September 14, 1862 and is buried at Maplewood Cemetery, Charlottesville, VA.

Strange is the author of one of the oldest cadet letters still in existence. Written to his sister in 1840, it describes many aspects of early cadet life.