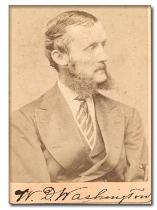 William Dickinson Washington, a gifted American painter best known for the Civil War painting "The Burial of Latane," came to the Virginia Military Institute in 1869 to serve as the school's first Professor of Fine Arts. During his brief tenure - he died in December 1870 at the age of 37- Washington produced more than twenty portraits and landscapes which are now part of VMI's art collection.

Washington was born in Clarke County, Virginia in October 1833, the son of Perrin Washington and Hannah Fairfax Whiting. Showing artistic talent at an early age, as a young man he served as a draftsman in the U. S. patent office. He subsequently studied in Dusseldorf, Germany under Emmanuel Leutze, (of "Washington Crossing the Delaware" fame). Returning to Virginia, he served as a staff officer during the Civil War and during this period he completed sketches of a number of mountain scenes which he later put on canvas. While in Richmond, Virginia he completed two major paintings, "The Burial of Latane" and "Jackson Entering Winchester." At the end of the war he established a studio in New York, working there until he accepted the position at VMI in July 1869.

Professor Washington was commissioned by VMI to create portraits of alumni and faculty who were killed in battle during the Civil War. Having never known most of his subjects, he relied upon photographs and descriptions to complete the portraits. Subjects include Colonels George and Tazewell Patton, Gen. Robert E. Rodes, Gen. Stonewall Jackson and numerous others. In addition, he completed several beautiful landscapes and paintings based upon Tennyson's poems. Washington also established the Institute's first art gallery, funded with a gift from William W. Corcoran, in the building known as the Porter's Lodge or Round House (torn down 1912); and he provided instruction to cadets who were interested in fine art. Suffering from health problems throughout his life, he died suddenly on December 1, 1870, just 18 months after arriving at VMI.