This list is made available for researchers who want to browse a concise list of faculty and alumni manuscript collections. It is not a substitute for the online catalog.

The online catalog is the best resource for detailed searching, direct links to full text, and the most up-to-date information about our manuscripts holdings. 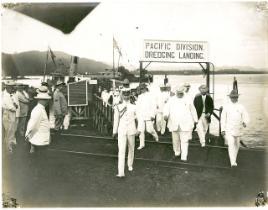 Panama Canal Construction History
Williamson graduated from the Institute in 1884 and shortly thereafter began a distinguished career in Civil Engineering. Most notably, he served as Division Engineer of the Pacific Division of Panama Canal from 1907-1914.

Burgess, Chester F., Collection (MS 0339)
Professor of English at the Virginia Military Institute from 1962-1988. The collection consists of edited manuscripts of three publications.

Crozet, Claudius. Papers. (MS 0059).  Online Access  (Jefferson letters and selected other documents)
Educated Ecole Polytechnique in Paris; came to U.S. in 1816; engineer; President, 1st VMI Board of Visitors.  Ca. 30 items, bulk documenting Crozet's life prior to his move to the United States in 1816; also two letters from Thomas Jefferson to Crozet, both dated 1821

Edwards, Murray French. Diary. (MS 0038)
Murray French Edwards (Class of 1907) was a Professor of German at VMI for most of his career. Travel diary, in German, describing trip to Germany in summer 1913.

Finklehoffe, Fred F. Collection (MS 0230)
VMI Class of 1932; co-author, with John Monks, Jr., of "Brother Rat". Manuscript of an early version of the play Brother Rat, ("When the Roll is Called") written while a cadet; screenplays, clippings, and scrapbooks from Mr. Finklehoffe's cadetship and career.

Gilham, William. Papers (MS 0267)
Faculty member, 1846-1864. Includes Gilham's letters of application and recommendation for a Professorship at VMI; misc. correspondence and other documents and photos.

Gray, Elmon T., Papers (MS 0504)
Small collection of misc. personal papers, including biographical information, certificates, and photos. Elmon T. Gray (VMI Class of 1946; b. 1925 d. 2011) was a longtime Virginia State Senator and served on the VMI Board of Visitors.  These papers do not include substantive documents from his professional or political careers.

Hardin, Mark B., Papers (MS 0440)
Educator who taught chemistry at the Virginia Military Institute and at Clemson University. Bulk consists of letters to his siblings, 1864-1899.

Illig, John S., scrapbook (MS 0111)
Musician; member of the VMI band 1869-1899; died in Lexington, Virginia, 1903. Scrapbook (fragment) with 20 items documenting Illig's life, including passport and other items dating from his years in Germany.

Lyne, Cassie Moncure, Scrapbooks. (MS 0461).
Scrapbooks ca. 1930-1943, compiled by Cassie Moncure Lyne.  Bulk relates to the genealogy of the Moncure and Lyne families and to the Civil War.

Major, Julian Neville, Papers. (MS 0424)
Papers, 1904-1912, of Julian Neville Major, VMI Class of 1907. Primarily of family correspondence, including letters written by Major to his family while he served as Professor of Mathematics and Engineering at St. John's University, a Protestant college in Shanghai, China.

Mann, John H. C., collection (MS 0227)
Class of 1921; Civil Engineer and Professor of Engineering. Testimonial letters from Mann's former students at VMI, presented to him when he retired from the Engineering Department in 1967; misc. other.

McCarthy, Frank., Collection (MS 0350)
Class of 1933; War Dept. General Staff & Secretary to Gen. George C. Marshall; BG U.S. Army Reserve; producer of movie Patton; Misc materials from the life of Frank McCarthy, articles written by McCarthy during his VMI cadetship and during the two years after graduation; script for the newsreel "West Point of the South" (1936); and items from the production of the movie Patton (1970)

McClure, William G., papers. (MS 0415)
Papers documenting the U.S. Marine Corps career of William G. McClure, Jr., Virginia Military Institute Class of 1943. The bulk of the papers concern the period of his active duty during World War II, when he served with the 1st Marine Division in the Pacific.

Millner, Samuel M., papers (MS 0256)
Class of 1911; Professor of French at VMI, 1911-1961. Personal papers, including correspondence with his wife Esther Ayres Millner and with classmates.

Moncure Family Misc. Papers. (MS 0416). 1849 cadet letter available online
Miscellaneous letters and other documents to and from various members of the Moncure family, who have a long association with VMI.  A complete inventory is located in the folder with the documents.  Related collection: MS 0461 Cassie Moncure Lyne Scrapbooks

Monks, John C., collection (MS 0229)
Class of 1932; writer, director, producer. Typescript manuscript (1944) of the book A Ribbon and A Star. The Third Marines at Bougainville, published in 1945; cadetship photos.

Neikirk, Joseph D., collection (MS 0308)
Miscellaneous papers of Joseph Neikirk, VMI Class of 1932, who served as Executive Vice President of the VMI Foundation from 1954 until his retirement in 1978.

Patton family biographical manuscript (MS 0320)
Biographical sketch of John M. Patton Sr. (b. 1797) and his 7 sons, all of whom served in the Confederate States Army.

Patton, George S., compositions (MS 0253)
Class of 1907 (attended for one year, 1903-1904); General U.S. Army. One essay and three poems by George S. Patton. The essay (2 pages), ca. 1903, discusses the significance of the VMI Corps' participation in the Battle of New Market (May 1864) and the New Market ceremony; it was probably written during the year Patton attended VMI or shortly thereafter.

Steidtmann, Edward, diary. (MS 0145)
VMI faculty member (Professor of Mineralogy and Geology). Diary kept during his trip to Alaska in the summer and fall of 1918.

Tidwell, William A., papers (MS 0426)
Class of 1939.  Miscellaneous personal papers (17 items). During his military career he worked primarily as an Intelligence officer and was assigned to the Central Intelligence Agency in the 1950's and 1960's. Routine correspondence; certificates.

Turner, Robert K., Collection. (MS 0003)
Proofs and other pre-publication materials relating to the book Letters of a New Market Cadet  edited by VMI faculty members Turner and John G. Barrett. Most of the original documents that appear in the book are located in the Jaqueline Beverly Stanard Papers, VMI.

Williamson, Sydney B., papers (MS 0206)  Online Exhibit
VMI Class of 1884; civil engineer; Pacific Division engineer for Panama Canal construction, 1906-1914.  Papers include extensive material, 1906-1914, documenting the construction of the Panama Canal, including project and planning files, drawings, photographs, correspondence and reports; also papers about Williamson's other engineering projects in South America and the United States, and his service with the Interoceanic Canal Board and the Goethals Memorial Committee.

Wise, Henry A., papers. (MS 0123)
Class of 1927; lawyer, Watertown; Capt. U.S. Army during World War II; New York state legislator; author of the VMI history, Drawing Out the Man. Personal papers including general and family correspondence, subject files, and materials relating to the publication of his book, Drawing Out the Man: The VMI Story.

Youell, Rice M., collection. (MS 0417)
A collection (10 items) of certificates and other items from the career of Rice McNutt Youell, VMI Class of 1914. Included are the citations for the Croix de Guerre and the Distinguished Service Cross, dating from his service in France during World War I.