This list is made available for researchers who want to browse a concise list of personal papers relating to Cadet life and VMI history during various eras.  It is not a substitute for the online catalog.

The online catalog is the best resource for detailed searching, direct links to full text, and the most up-to-date information about manuscripts holdings. 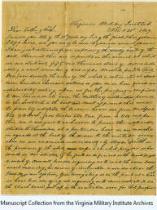 Letter to his parents is the oldest extant letter written by a VMI cadet. Dated November 30, 1839, shortly after the first cadets arrived in Lexington, the letter provides a cadet's view of the newly established Institute.  The letter and full text transcription are viewable online

Campbell, Nathaniel H., letter (MS 0191)
VMI Class of 1843; letter, 1841  to Congressman requesting assistance in obtaining a commission in the army.

Fitzhugh, Philip A., Papers (MS 0067)
VMI Class of 1846; physician; CSA veteran; d. 1908.  Include 6 letters from Fitzhugh to his brother, containing many references to cadet life.

Powell, Daniel Lee. Letters. (MS 0076)
VMI Class of 1847. Letter, 1844, from Henry T. Lee (Class of 1845 & Powell's uncle) to Cadets Fitzhugh and Keeling, requesting that they treat Powell with kindness. One letter, 1846 from Cadet Powell to his mother, describing guard duty at "Camp Crozet" and other topics.

Saunders, Valentine Cook. Letter. (MS 00071) Available online
Class of 1842.  Letter to his parents is the oldest extant letter written by a VMI cadet. Dated November 30, 1839, shortly after the first cadets arrived in Lexington, the letter provides a cadet's view of the newly established Institute.

Strange, John B., letter. (MS 0153)  Available online
VMI Class of 1842. One letter written by Cadet Strange to his sister Anne, June 1840. Discusses VMI and personal matters. One of the oldest cadet letters.

Yager, William O., Journal. (MS 0188)
VMI Class of 1852.  Journal fragment written during his cadetship. Bulk concerns dispute between his classmates John A. Thompson and William M. Gordon that led to a court of inquiry/court martial.

Founders Day Cadet Speech. (MS 0466)
Manuscript containing the text of a speech given by an unidentified cadet on the Institute's first Founders Day anniversary, November 11, 1843.

Arnold, William E., notebook. (MS 0018)
Poetry notebook compiled by William E. Arnold (VMI Class of 1853), during the period 1849-1864. Such notebooks were popular among cadets of the mid-19th century.  Notebook also includes miscellany such as clippings, puzzles, and riddles.

27 ink and wash drawings by 19th century American architect Alexander J. Davis, who designed the VMI Barracks and several of the other original structures at the Institute. The collection includes plans for the Superintendent's residence, faculty residences, and other drawings.

Gunn, Giles. Papers (MS 0292)  Online access
Five letters, 1848-1854, written by Giles Gunn, a teacher from Connecticut who was working in Lexington, Virginia during the mid-nineteenth century.  He describes his teaching duties, events at VMI, and life in Lexington.

Lynch, Jacob. Letter (MS 0195)
Letter, 1859 from Jacob Lynch to his son, VMI Cadet David C. Lynch. Mr. Lynch reprimands David for excessive demerits and for acquiring debts that have not been paid.

Taylor, Richard C., letter. (MS 0159)
Class of 1854; Letter, 1854, to his father describing in detail the circumstances surrounding the murder of his classmate Cadet Thomas Blackburn.

Waddell, James H., papers. (MS 0130)
Class of 1855. Letter (1855) to sister, containing detailed description and pencil drawing of his room (#14) in Barracks and of his roommates; a second drawing of a barracks room & roommates (similar to a sketch found in the Shepherd Collection, MS#0019); pencil map Battle of Bethel Church, 1861. Letter of recommendation, 1879

Coleman, George T., letter. (MS 0073)
Class of 1870. Two letters, one regarding reinstatement to VMI and the other defending the Corps of Cadets against accusations that they had been harassing black citizens of Lexington.

Mosby, John B., papers. (MS 0128)
Class of 1875.  Six letters from John B. Mosby to family members; letters written in 1873 from VMI contain references to faculty, academics, and cadet life.

Amiss, Frederick T., letter (MS 0479)
Class of 1886. Letter to his father, dated December 1884. Describes confrontation between cadets and Commandant Scott Shipp regarding an investigation into an explosion of the VMI magazine.

Cochran, John L., Papers. (MS 0025)
VMI Class of 1883. Papers consist of four volumes of class notes (1882-1885) taken while Cochran was a student at Swarthmore and UVA (following his VMI attendance), with some examples of VMI poetry and sketches interspersed; diary, with sketches (1881), containing short and sporadic entries made while at VMI; other items.

Gilliat Company documents (MS 00306)
The firm of John K. Gilliat & Co. (London) advanced money to VMI in 1863 to purchase books & cadet clothing. The firm later forgave the interest on the loan & was commemorated in the Gilliat Scholarship.

Vest, William W., letter. (MS 0097)
Class of 1892. Letter, 1887, from Cadet Vest to his cousin. Topics include treatment of new cadets; routines such as drill and inspection; restrictions.

Bowering, Benjamin Collection (MS 0122) Online Access
Original manuscript score of the "VMI Spirit", written by alumnus Benjamin Bowering while he was an Assistant Professor at VMI in 1916.

Houston, Levin J., drawings (MS 0279)
Class of 1925. 17 watercolor and pen/ink drawings; several were featured in the cadet magazine known as "The Sniper," published during the 1920's.

Davis, Albert D., papers (MS 0198)
Class of 1935.  Papers, including diary, scrapbooks, and miscellaneous correspondence dating from cadetship; 3 other scrapbooks date from his tour of duty in Korea, 1951-1952, and contain clippings, military documents, and photographs.

Finklehoffe, Fred F., Collection (MS 0230)
Includes early version of the play "Brother Rat" ("When the Roll is Called"), which was submitted to VMI Professor of English Raymond E. Dixon by Finklehoffe and John Monks, Jr.

Neikirk, Joseph D., collection (MS 0308)
Class of 1932, who served as Executive Vice President of the VMI Foundation from 1954 until his retirement in 1978. Includes cadet scrapbook, cadet account book.

Eickelberg, William T., papers (MS 0353)
4 items, including a "three year testimonial" that was presented to each member of the Class of 1944, in lieu of a diploma, when the class members were called to active duty in May 1943.

Phillips, H. Franklin., document (MS 0316)
One certificate presented to VMI Cadet H. Franklin Phillips in May 1943. This "three year testimonial" was presented to each member of the Class of 1944, in lieu of a diploma, when the class members were called to active duty in May 1943

Letters of Appointment.
This collection consists of notices of appointment sent to new cadets at the Virginia Military Institute. Other individual manuscript collections contain examples of this document

Cadet drawing exercises
A collection of 19th century cadet drawings (approximately 200 items) completed primarily as assignments for Professor Thomas H. Williamson's architecture, engineering, and drawing courses at the Virginia Military Institute. A few of the drawings were completed for a geometry course or were not class assignments.

VMI Music collection
A collection, (1857-1930) of published music written for or about the Virginia Military Institute during the nineteenth and twentieth centuries. The earliest is "The VMI March" (1857) by C. M. Stephani. The collection also includes the "VMI Spirit," "The VMI Alma Mater," "The VMI Cadet Waltz" and others.

Cadet Life collection
A collection of miscellaneous documents from various eras in VMI's history, reflecting the humorous side of cadet life, 19th-early 20th centuries. Other collections may include related documents.