This list is made available for researchers who want to browse a concise list of personal papers relating to Lexington, Rockbridge County and the Shenandoah Valley of Virginia.  It also includes miscellaneous manuscripts not listed in other categories. It is not a substitute for the online catalog.

The online catalog is the best resource for detailed searching, direct links to full text, and the most up to date manuscripts information. 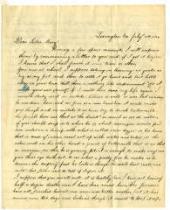 Letters, 1848-1854, written by Giles Gunn, a teacher from Connecticut who was working in Lexington, Virginia during the mid-nineteenth century. Addressed to his family in Litchfield, he describes life in his school and in the town.

Bank of Virginia document. (MS 0057)
One bank document, issued on August 4, 1840 from the Buchanan office of the Bank of Virginia to Jacob M. Ruff, Proctor of Washington College. The notice states that Ruff, as co-signer for J.W. Pettigrew who cannot make payment, is responsible for repaying the sum of $825.

Bushong Family Ledger  (MS 0329)
Ledger-daybook (7.5 in. x 6 in. x 3/4 in., ca. 252 pages) that belonged to the Bushong family of New Market, Virginia. First section contains entries (1843-1853) by Jacob Bushong; later entries (1879-1903) are by Jacob's grandson, William F. Bushong. Bulk contains listing of daily expenses; also included are recipes and misc. notes. The Bushong family owned the land on which the Battle of New Market took place (May 15, 1864); their farmhouse is preserved as part of the New Market Battlefield Historical Park.

Charles Carroll documents.   (MS 0411).
Miscellaneous financial papers (7 items, 1770-1826) of Charles Carroll of Carrollton, Maryland statesman, a member of the Continental Congress and signer of the Declaration of Independence. Included are receipts and other documents relating to business transactions.

Chew Family Account book. (MS 0359)
Account book (8 x 6 x 1/2 inches; ca. 154 p.) of unidentified member of the Chew family from the Shenandoah Valley region in Virginia. Entries (1834-1883); most pre-1860), include itemized accounts of customers for a variety of goods and services; including carpentry, shoemaking, hauling; list of expenses; notes about crops and cattle; clippings; recipe.

College of Avranches scrapbook  (MS 0322)
Scrapbook presented to the Virginia Military Institute by the students of the College of Avranches (France) "as a token of their gratitude to General Patton, the Liberator of Avranches." Contains drawings, photographs, postcards and maps detailing the history of the town from its founding through the end of World War II.

Charles M. Figgat collection  (MS 0283)
Charles M. Figgat was the cashier at the Bank of Lexington who embezzled over $145,000 and fled on February 14, 1895. Figgat's actions forced the closure of the bank and adversely affected the local economy; VMI incurred significant losses. The collection contains a reward notice distributed after Figgat fled; 10 cancelled checks from local banks, 1870-1871, bearing Figgat's signature; and one petition to the Lexington school trustees endorsing Jacob Fuller for a teaching position, signed by Figgat and other citizens.

Giles Gunn Papers  (MS 0292)  Online Access
The collection consists of five letters, 1848-1854, written by Giles Gunn, a teacher from Connecticut who was working in Lexington, Virginia during the mid-nineteenth century. The letters are addressed to Gunn's family in Litchfield County, Connecticut. He describes his teaching duties, events at the Virginia Military Institute (Finals , 1848, including a description of the VMI band; the murder of cadet Thomas Blackburn, 1854), and life in Lexington (schools, religion, rumor of a slave uprising, 1851).

Historic American Buildings Survey for Lexington, Virginia  (MS 0296)
The collection includes plans, photographs and descriptive text documenting selected Lexington and Rockbridge Country (Virginia) buildings which were included in the Historic American Buildings Survey. The Survey was conducted under the auspices of the National Park Service and the original records are located in the Library of Congress.

Thomas Johnson document  (MS 0385)
One page manuscript, dated May 10, 1707, Augusta County, Virginia. The document is a handwritten version of a newspaper advertisement signed by Thomas Johnson; he requests help in locating two stray horses and offers a reward for their return.

Jordan Family collection  (MS 0238)
Notebook, correspondence, and notes containing genealogical information about the John Jordan family of Lexington, Rockbridge County, Virginia. Jordan, a builder and brickmason active in Lexington during the early nineteenth century, was responsible for the construction of several of the town's most notable buildings. The collection also includes photographs of Col. John Jordan and his son John.

Lee-Jackson Foundation Collection.  (MS 0288)
A collection of approximately 50 miscellaneous unrelated manuscripts (1744 - 1908; bulk 19th century), donated by the Lee-Jackson Foundation in conjunction with their gift of the Jackson Papers (MS 0102). Many date from the Civil War or bear the signatures of Civil War era notables.

Lexington Arsenal and Virginia Militia Records  (MS 0244)  Online Access
47 items, 1702-1839, concerning the operation of the Lexington Arsenal, various regiments of the Virginia Militia stationed in Lexington, and some militia records that pre-date the establishment of the arsenal. Documents include regimental returns, a register of the guard, garrison orders, accounts and payrolls, and appointment documents.

Waller Family Papers (MS 0484).
The collection contains correspondence (1821-1849) to and from various members of the William M. Waller family of Amherst County, Virginia.

Weather Observation Reports, Lexington, Virginia  (MS 0335)
Collection consists of forms filled in by official weather station observers at the Virginia Military Institute, where the local station was once located, 1904-1999.

Wise Family letters  (MS 0248)
Miscellaneous incoming and outgoing correspondence (13 items) of Henry Alexander Wise, Governor of Virginia from 1856-1860. Also included is one unrelated letter (1813 July 19) from George Wise to Tully Wise, in which he describes the destruction by the British of his Norfolk County, Virginia plantation.