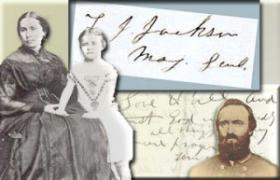 Thomas Jonathan (Stonewall) Jackson served on the VMI Faculty as Professor of Natural and Experimental Philosophy & Instructor of Artillery from August 1851 until the beginning of the Civil War in April 1861. The Virginia Military Institute Archives holds a large collection of Stonewall Jackson's personal papers, Jackson images, and other information about his life and times. Included on this page are links to full text correspondence, as well as to full text information about various topics of interest to Jackson researchers. 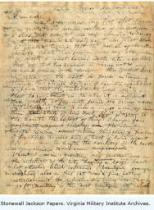 Spotlight: Jackson in the Mexican War

This 1847 letter from the Stonewall Jackson Papers was written while Jackson was serving in the U. S. Army during the Mexican War.  Jackson recounts his experiences for his sister, Laura, including a visit to a church. "The church is the most highly ornamented on the interior of any edifice which has ever come under my observation. On entering this magnificent structure we are struck with the gaudy appearance on every side but most especially the opposite end which appears to be gilded with gold." Additional letters from this period are also available online.