History of a VMI Tradition 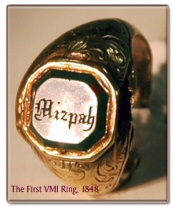 The presentation of a VMI class ring, and the formal dance known as Ring Figure that marks the occasion, takes place in November of the Second Class (Junior) year. The event represents an important milestone in the life of a cadet, second only to graduation in importance. Each class is responsible for designing a unique ring, which incorporates symbols significant to the group. The elaborate Ring Figure tradition known to today's cadets dates to the 1920's; prior to that time, rings were received in a much more informal setting.

Although VMI opened in 1839 and the first cadets graduated in 1842, the earliest cadets did not receive VMI rings. The first ring was designed by members of the Class of 1848 and was presented to graduates during Finals celebrations. Class members paid five dollars for the ring, a large sum in the mid-nineteenth century. The original ring was simple in design -- the word "Mizpah" was cut in the stone in Old English script, and the inside band was engraved with the words "1 of 24, July 1848." Mizpah, from the Hebrew, is typically translated as "the Lord watch between me and thee, when we are absent one from another." The term signified brotherhood, the enduring connection among the 24 graduates.

The custom of receiving class rings did not become firmly established until many decades later, beginning with the Class of 1908. During the 19th century the practice was observed by some classes and ignored by others; if a class chose to have a ring, it was presented just prior to their graduation in an informal setting. 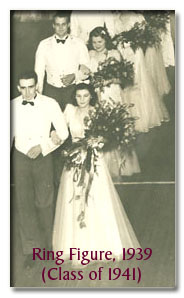 This changed in 1907. In addition to establishing the ring tradition on a permanent basis, the Class of 1908 was the first to receive rings during its Second Cass (Junior) year. However, until 1926, rings continued to be received during Finals week. Class members would gather in Brother Rat's room and all would put on their new rings simultaneously.

The Class of 1928 was the first group to move the ceremony to November and to hold a Ring Figure dance. Since 1927, Ring Figure has been held near Thanksgiving during the Second Class year, and the receipt of rings has been associated with a formal dance. The modern celebration comprises several events that take place primarily on the weekend before Thanksgiving. The rings themselves have become increasingly larger and more elaborate in design, in marked contrast to the much plainer examples from the 19th century.