As early as July 1845 there is evidence of proposals to establish a cavalry unit at VMI. In 1848, VMI's Superintendent Francis H. Smith arranged with a patron to acquire some ten to twenty horses to be stabled at VMI with the view of providing practical instruction in horse artillery drill. The question of horse drawn artillery and cavalry drill was again discussed in the Superintendent's annual report in 1858. Smith wrote, "It has been ascertained that the parents of at least thirty cadets...are willing to supply temporarily a horse for each, provided the expense of keeping the same can be borne by the Institute." When no horses were available, cadets themselves served as draft animals. Artillery instruction under Major Thomas J. Jackson - Stonewall - was an exhausting affair, with students attempting to maneuver the cannon in response to Jackson's shouted commands. In retaliation, cadets frequently performed pranks such as withdrawing the linchpins from the cannon wheels, or hiding annoying bells on the caisson. 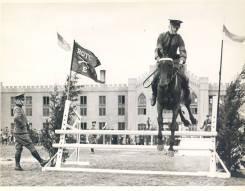 In December 1916 Superintendent Edward West Nichols informed the VMI community that three units of ROTC - cavalry, field artillery, and infantry - were to be established at the Institute under the National Defense Act of June 1916.  The government agreed to furnish horses, forage, and the officers and men necessary to lead the mounted unit; it was left to the institution to provide stables and drill fields.  A campaign was initiated in early 1917 to solicit contributions from VMI Alumni in support of new program.  On July 7, 1919, 100 horses arrived at VMI along with a detachment of twenty troopers from the 13th Cavalry to care for the animals and provide instruction for the cadets.  The stables were ready for use on November 1, 1919 and mounted drills started immediately.  VMI also established Polo and Horse Show Teams, as well as a Hunt Club;  and recreational riding became a part of cadet life in the 1920's and 1930's.

World War II and the age of mechanization brought an end to horses at VMI.  Horsemanship had been taught at the Institute from 1919 until 1942.  When horse artillery was stopped in late 1942, the guns were disposed of and the horses transferred from artillery to cavalry.  With the end of the cavalry unit in 1946, VMI officials worked out arrangements to retain a small stable of mounts for continued riding instruction and for formal military ceremonies.  A small voluntary cavalry troop continued to take part in special reviews.  About forty horses remained and made their final appearance at a garrison review during graduation week, June 1948.  With the departure of the horses, the stables were remodeled into a building for use by the military science department; an indoor riding hall, built in in 1941, became a field house for basketball and indoor track.

If you would like to learn more about this topic, see the following book: