Statues and Monuments at VMI 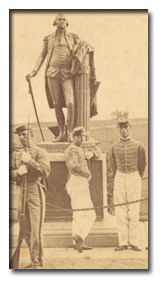 Listed in chronological order. For detailed information about this topic, contact the Archives.