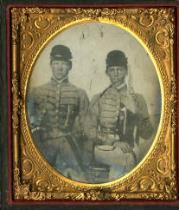 Letters written by Cadet Gatewood (at right in photo), to his parents and other family members, 1861-1864.  Early letters describe life at VMI, including hazing, daily routine, secession, and other events. Subsequent letters date from his service with the 11th Virginia Cavalry Regiment,Company F, (Bath Squadron), including a letter written after the second Battle of Manassas (2nd Bull Run), Sept 1862. Read more about Andrew Gatewood and his letters.

These examples of online full text collections provide insight into the life of a cadet during the period 1861-1865. For additional collections see the Civil War Manuscripts Quick Guide or search the VMI Archives Online Catalog.

For the rules governing cadet life, see the Regulations issued in 1854.  These were in effect during the Civil War years.

The 1863 Register of Officers and Cadets (similar to a modern course catalog) contains information about classes and textbooks.

For information about VMI's extensive official records from the Civil War years, contact the Archives.