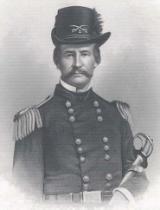 General David Hunter and the Burning of VMI, June 1864

For four days in June 1864, Union troops commanded by General David Hunter occupied the small Shenandoah Valley town of Lexington, the home of the Virginia Military Institute. The federal forces, about 18,000 strong, entered the town on the afternoon of June 11. General John McCausland, a VMI graduate and former faculty member, the Confederate troops were greatly outnumbered and were soon forced to retreat. The VMI Corps of Cadets, having only recently returned to VMI after their participation in the Battle of New Market on May 15, were also ordered to retreat; they camped near the top of the Blue Ridge Mountains, about two miles from Balcony Falls, on the night of the 11th. There were no civilian or military casualties as a result of this occupation. However, VMI was both the site of a state arsenal and a military training school, and the Institute was considered to be a legitimate military target. On June 12, Hunter ordered the burning of VMI. The cadet Barracks and two faculty residences were extensively damaged, as were the library and laboratory equipment. The troops also removed the Institute's statue of George Washington, which was taken to Wheeling, West Virginia as a trophy of war; it was returned in 1866. The Union forces left on June 14, marching over the mountains to Lynchburg.