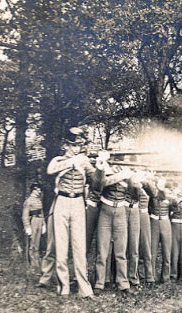 The VMI Corps of Cadets fought as a unit at the Battle of New Market on May 15, 1864; ten cadets died as a result of their wounds. In the Spring of 1866 the remains of Cadets Jones, McDowell, Jefferson, Wheelwright, and Atwill were brought to VMI for reburial. On May 15, the second anniversary of the battle, the bodies were escorted in a procession of the Corps of Cadets from the VMI hospital to the town's Presbyterian Church, where memorial services were held. Following the ceremony, the bodies were placed in a vault in the old Porter's Lodge located near the Limit Gates.

In 1878 the remains were moved to the newly created cadet cemetery (it no longer exists), located in a wooded area which now is the northwest corner of the parade ground; and in 1912 to their final graves under the statue "Virginia Mourning Her Dead", the monument to the New Market cadets which was dedicated in 1903. Although individual headstones mark their graves, the remains are actually buried in a copper box set into the foundation of the monument. A sixth grave --- that of Crockett --- was added in 1960. Four of the cadets are buried elsewhere.

The Institute has always observed the anniversary of the battle, with a formal ceremony in place by 1878, coinciding with the establishment of the cadet cemetery.  For the next 34 years, until 1912, a ceremony was held annually on May 15 in the cemetery.  In 1887, the French custom of the roll call of the dead was first used in a New Market Day observance, and for many years it was the usual to have the roll call at every formation of the Corps on that day. This description of the 1890 ceremony is typical of the era:

"Tomorrow the 15th of May being the twenty-sixth anniversary...there will be suspension of all drills and academic duties.  at 5:30 p.m. the flags on the Barracks will be set at half staff, and the Band will assemble in the cemetery and play appropriate music while the graves of the youthful heroes who there lie buried are being strewn with flowers in grateful memory of their selfless devotion to the cause of their country...." 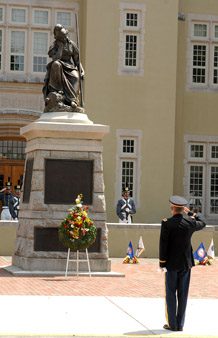 In 1912 the New Market Monument was moved to its present location, and the bodies of cadets were relocated from the old cadet cemetery to a niche under the monument.  Since 1912, when a single location first marked both graves and memorial statue, the annual ceremony has taken place in front of the monument.

Today, the New Market Ceremony commemorates not only the bravery of the Cadets called to the battle at New Market in 1864, but the sacrifice of all Institute alumni who have served our nation.  It is held during VMI's Finals Week celebrations, and is open to the public. Visitors should contact the VMI  Office of Communications and Marketing for up-to-date schedule information.

The event consists of three parts:

The Ceremonial Formation: The Corps of Cadets march from Barracks to the parade ground, forming two battalions centered on "Virginia Mourning Her Dead," the New Market Monument.

The Roll Call: The ceremony begins with the historic roll call of the ten cadets who died in the Battle, each name called by the Commander of the Company in which the New Market Cadet served. In response to each name called, a cadet appointed for the ceremony gives the traditional reply "Died on the field of honor." The Regimental Commander then gives the full report to the Commandant.

The Ceremony and Review: Floral tributes are laid at the monument and head stones of the ten cadets memorialized here, the Chaplain recites the New Market Prayer, and a 3 volley salute is fired. After the gun salute is an echo rendition of Taps, the playing of Amazing Grace, followed by the eyes-right salute to the Commandant as the Corps of Cadets marches from the parade ground, along Letcher Avenue, passing in front of the monument.